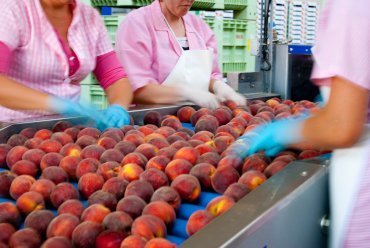 This is the first year that its new farm, La Falamosa is producing fruit, after planting the crops at the beginning of 2018

A new farm belonging to HaciendasBio, the top ecological fruit and vegetable producer in Spain and the leader in exporting these products to Europe, where its stone fruit crops were planted in January 2018, is now coming into production. In its first year of activity, La Falamosa has produced 30 tonnes of peaches and 75 tonnes of nectarines. The harvesting of these products started at the beginning of May, almost a fortnight earlier than shown on the harvest schedule developed for these products by the company on its farms in Extremadura and Catalonia. Stone fruit represents 60% of the company’s global production.

This new farm of 97 arable hectares is located in Dos Hermanas (Seville), in the natural area of Brazo del Este, close to the Guadalquivir marshland, in the Doñana National Park and a few kilometres from the coast. It has 15 hectares of nectarine production; 6 hectares of peach production; 30 hectares of table grapes and 5 of plums. To a lesser extent, it also produces figs and pumpkins.

La Falamosa also has a 25,000 m3 irrigation pond. It is fully designed to eliminate the salts contained in the water coming from the Guadalquivir River. Additionally, 90% of the energy used for irrigating the crops comes from photovoltaic panels.

The farm in Seville has a damp climate and high minimum temperatures that allow early peach and nectarine crops. Also, the temperature changes between the morning and the night are minimal in Seville, an aspect that encourages the production of these fruits in the region.

Andalusia, a key region for HaciendasBio

Andalusia is the second autonomous region with most hectares of ecological production by HaciendasBio. It encompasses 23% of the company’s land. It has 433 hectares in eight farms, seven in Almeria and one in Seville and it grows 31% of its total production in the region, a figure that reached 10,000 tonnes in 2018.