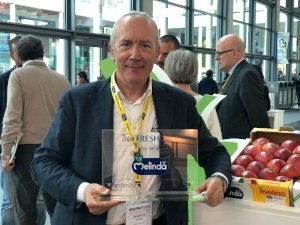 In 2023, along with La Trentina, it will reach a total production area of 680 h in ecological apples

In Italy alone, bio apples make up almost 5%, and in other Central European countries this goes up to 15%. For the past few years, Melinda has been getting down to work to adapt its strategy with a firm commitment to this segment. The company (integrated in the third-degree cooperative APOT to which La Trentina also belongs), currently has 80 hectares in production and 230 under conversion, and it foresees adding 200 more. At the same time, La Trentina has 70, it is in the process of converting another 50 and it will add 50 more in a few years’ time, meaning that, between both, they expect to have a total of 680 hectares of bio apples in 3-4 years, the general manager of Melinda, Paolo Gerevini, informed Fruit Today.

“We are going to continue backing our classic varieties (Gala, Fuji, Golden), along with others with resistances that are exclusive to us for marketing in Europe,” he explains. This is the case of WEB 6581 (pending a commercial name), which has great flavour and resistances to pathogens that allow it to be grown near towns, ensuring production with the highest health safety guarantees.

In line with Melinda’s sustainable philosophy, it is worth pointing out the expansion of its Underground Cells for storing apples, excavated at a depth of 300 metres underneath the Dolomites. This worldwide pioneering system allows an important 53% saving of energy compared to conventional cold storage rooms, along with water savings (10 Olympic swimming pools/year).

“We are going to carry out the fourth phase that will allow us to house 40,000 tonnes. Around 10% of the total in cold storage from Melinda will be carried out in these cells (both conventional and bio production).”

Melinda has recently launched three new top-range apples: one from the Gradisca variety, which is exclusive to the company; Morgana (Kizuri variety) and Sweetango. All of them are added to the company’s extensive range of quality products, which are becoming increasingly popular amongst consumers. In fact, Melinda recently received the award for Brand of the Year in Italy (an award that is granted by the whole agrifood sector.) “We are the brand that has grown most in visibility, followed by Chiquita”.