Juan López was born in the same land as the actor and director Paco Rabal, in Águilas (Murcia) in 1967. His family, as did the family of his famous counterpart, came from the country village of Cuesta de Gos. 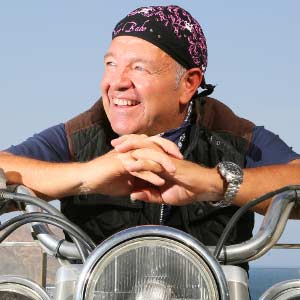 Juan López was born in the same land as the actor and director Paco Rabal, in Águilas (Murcia) in 1967. His family, as did the family of his famous counterpart, came from the country village of Cuesta de Gos. He says he married Angeles by ‘elimination’ (they were the only ones left single in their group of friends). Today they have been married for 26 years and are the parents of two youngsters, aged 20 and 24.

I find a very versatile man, who can go from being a biker to an art collector or who can recite you a poem. In fact, he has just returned from a motor biking holiday around Galicia and the Basque Country, where in the company of his friends (the Hippy, the Dancer and the Shepherd) he travelled in search of the best gastronomy.

It is easy to dive into his life because there is a novel, “Rambla Abajo”, about the lives of the three generations before him. A biographical and traditionalist book which, in its time, was a finalist for a literary prize.

Juan, who passed his Secondary Education Certificate whilst doing his military service, is the resulting blend of intelligence, fun and banter, combined with a deep sense of duty, absorbed at home, where they even worked on Sundays.

Prior to our meeting, I had had informal chats with him and I was amazed to discover him to be an art lover and collector. Therefore, he told me that if I wanted to understand what he was going to show me, first I had to meet the artist. And so we visited the famous Manuel Coronado. The trust between the two is such that the painter had left the key to gate hidden so that Juan can go in whenever he wants.

How long have you known the artist?

I couldn’t say. It would be easier to ask me when I haven’t known him. We have always been friends, although he has lived in the United States, Barcelona, Mallorca and many other places, he always returns to his home and we meet up.

Do you buy art as an investment or because you like it?

Because I like it, and this is the reason why the works I have are very different. Most of them are by my friend Coronado, but I also have works by Perelló, López Davis, Lorenzo Martínez, Roca Fuster, Vicente Caballero, etc. The subjects and periods are very varied. I am always led by my heart.

I have so many paintings by Coronado that sometimes I lend them out for his exhibitions.

What a privilege to have an in-depth book on your family’s history!

Well, yes it is. When I discovered it by chance, it hooked me so much that I read it in one sitting, on tenterhooks. It told the history of my family, the same things that my father had told me. I got straight to work and managed to talk to the author’s nephew and publish over a hundred books.

The work was written by the squire of the lands where my family worked in La Cuesta de Gos, in the mountains. It is called “Rambla Abajo” because further down, in the Marina region, the first tomatoes were beginning to be grown and my father saw this as a chance to help his children get head. However, in La Cuesta, after the closure of the mine, people lived on a subsistence economy, working half-barren land that only produced esparto grass, capers or almonds.

How do you feel after your motor biking holiday in northern Spain?

Amazing. As bikers we form a good team. At least we didn’t have any problems eating well, as we did when we travelled the Route 66 in the United States. After that journey, we promised ourselves we would not do any more trips where good food was not guaranteed. And this is what we do. Last year, we travelled along routes in the Valle de Arán and this year, we went to the north again.

If your friends have nicknames, I suppose you do as well?

Ha ha. Nobody gets away without one. I am the “follatabiques”.

I’ve been told that you will travel over 1,000 kilometres to eat in a good place.

I would think twice about it.

Well, I wouldn’t. If I could go to Madrid only to be told my son wasn’t studying, how could I not escape to Casa Rufo in the Valle de Arán? At any time…

By the way, I’ve been told that you are a father to be reckoned with. Do you think this land gives its people strong characters?

I went ahead because I had warned my son. If he failed his exams, I would send him to boarding school, and I kept my word. I sent him to a school in Madrid and he failed again. I spent 17,000 euros on his 10 month stay. At the end of this time, I went and got him and put him to work cutting watermelons and aubergines. My wife said that I gave him the toughest jobs and it is true. He came home covered in dust and exhausted. I paid him the corresponding wages, but I only left him with 120 euros. He repaid me every single one of the 17,000 euros.

As he didn’t want to study, I told him that at least he had to learn English and I sent him to Vancouver for a year. The day we went to collect him at Madrid airport, we took another suitcase full of summer clothes with us, and he went directly to Senegal for 45 days to cut watermelons.

He learned it very well. Today I am proud of him. At the age of 24, he has his own company, which is doing very well.

Going back to wheeled vehicles, I believe that as well as motorbikes, you have also cut your teeth in the desert, but this time by car.

Ah, yes! Years ago, a good German friend and I travelled along a route through the deserts of Algeria and Morocco in a Volkswagen Touareg, which takes its name from this route.

And when you are at home, what is your daily routine?

I have the healthy habit of going out walking very early in the morning and soaking up the light and the landscape of this coast. I know perfectly well how the time of the sunrise varies. It is a walk I do with 5 of my 10 dogs.

What did you want to be when you grew up?

I wanted to work outside as a farmer. I’ve always been clear about this. I never considered any other option and, at the age of 15, I had already planted some hectares of tomatoes.

What will you do with so many works of art?

Obviously, many of them will go to my children, but my dream involves setting up the “Fundación Rambla Abajo” aimed at promoting local traditional culture and supporting young people who although they may have no resources, they do have potential. I think that in this world that moves so fast and is becoming globalised at an alarming rate, a great deal of the heritage from the local surroundings is lost. For example, young people today no long recite decima stanzas, a deeply-rooted oral tradition that goes way back in this area.