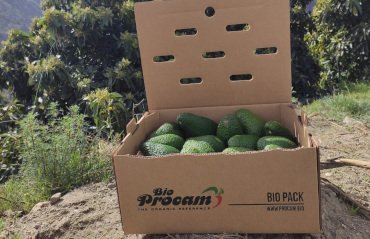 In 3 years, the company expects to increase its mango volume fourfold, which to date has been much more modest than its avocado crops

Sub-tropical fruit are, along with cucumbers, the most important crops from Bio Procam. Specifically avocados, with a volume of around 3,000 tn in a normal campaign, including the surface area of their farmer associates (over 250 ha) and collaborators (80 ha). Its campaign starts in October with the Bacon variety, followed by Fuerte (in November) and a few days later, it is the turn of Hass, with harvests starting between the 10th-15th of November in extra-early regions.

Another of its references, the mango, holds a much more modest role at present, but the company’s road map plans an exponential growth over the next 3 years, when they forecast multiplying the volume of this fruit by up to four. “Just one of our associates alone has planted over 20,000 trees including all the varieties (Irwin, Osteen, Kent and Keitt), and other producers have also planted as many trees,” the manager, Fernando Martín advances. For this campaign that is just starting, the prospects in tropical fruit are a great deal more promising than last year’s, and yields from normal years are expected to be reached.

In another segment, cucumbers (their star product in terms of volume), they will also continue to grow, but with a different strategy. “We are going to stagger the sowing more to ensure the harvests are more divided up. Last year in November and December the coincidence in volumes in the sector caused a disaster in terms of prices,” he recalls. “By staggering the plantations, we hope to alleviate the overproduction and the shortage of cucumbers at certain moments of the campaign and increase the total volume offered throughout the campaign by 20%.” In their case, they have (mainly) Dutch and French cucumber production 11 months of the year. “In ecological crops, the cucumber specialities make up a niche that is still too small, but we are not ruling them out for the future.” And he indicates: the trend for demanding ‘naked’ cucumbers (without a ‘second skin’), has been increasing and it now makes up 80% of their total volume. For this reason, they have decided to invest in a pre-cooling area during the labelling phase.

With regard to tomatoes, Bio Procam is advocating stability, after the drop in surface area they applied two years ago. “We are going to maintain a line that is similar to that of 2020/21 with vine, red and black marmande tomatoes. Last year we saved the campaign because we supplied the exact amounts for the clients who accompany us.”