New varieties due to climate change 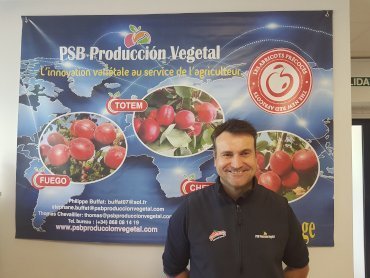 Stéphane Buffat, the company’s director, talked to Fruit Today euromagazine about the importance of this variety development in the different categories.

What are the problems regarding climate change for PSB?

Climate change does not only mean a lack of cold weather in the winter, but also that the winter starts later and later. This change can also be seen in the excess hours of heat (>25 degrees in October, >21 degrees in November, >18 degrees in December) that affects apricots more than nectarines, flat peaches or plums.

Excess heat in the summer (40-45°) for many days also has repercussions on the future apricot yield at the start of the floral differentiation and of the flower formation.

Specifically, what are the consequences for apricots?

The main consequences are a drop in production, greater heterogeneity in the ripening of the fruit and even the impossibility of producing fruit in some regions owing to the low yield.

What work is PSB doing to fight against this dramatic climate change?

PSB has been working on this subject for a long time, getting ahead of the problem that is about to occur. We have carried out a genetic improvement programme on low chilling, two-tone varieties of apricots that need fewer hours of cold and that are not adversely affected by excessive heat.

In recent years, we have found varieties, all of them self-fertilising, tolerant of Plum pox and with improved adaptation to climate change:

What are PSB’s new projects?

In addition to a new range of totally red, very sweet apricots (Red Premium range) we have a complete range of flat nectarines with pistilar closing and spectacular flavour that cover the period from mid-May to September and finally, a range of flat peaches with white flesh and 100% closure.

What is the evolution of new varieties of other species launched by PSB in 2021?

Thanks to our technical team, who are specialised in variety innovation and genetic analysis, we have a revolutionary range of white and yellow-fleshed nectarines, sub-acid or balanced, sweet with 1 or 2 Brix degrees more than the previous nectarine varieties.

The new range of yellow-fleshed, sweet and sub-acid nectarines:

The new range of white-fleshed sweet and sub-acid nectarines:

PrevSAT Royal, new developments that extend the season
“There will be no supply problems”Next
YOU COULD ALSO BE INTERESTED IN