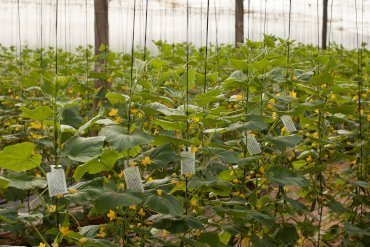 Tuta, aphids and red spider mites have proliferated this year. Bioline explains the reason and provides the keys to tackling them

This year, the fields of Almeria have had many problems with tomato leafminer, and aphids and red spider mites have become significant pests, without forgetting the increase in the incidence of virus diseases such as Spotted (TSWV) on peppers and tomatoes and new, emerging pests such as Green stinkbug (Nezara viridula), Creontiades pallidus… which appear in different locations and with increasing incidence. Amongst the reasons behind this, is the resistance that these pests have generated to the authorised chemicals, added to which is the change in insect behaviour caused by their improved development in the new environmental conditions owing to climate change, and other factors such as the incorrect handling of the necessary dose of auxiliary fauna. Fruit Today talked to Bioline Iberia, the new fruit bio-factory, arising from the merger of Bioline Agrosciences and Biocolor, to delve deeper into the tools available to tackle them. The company is developing dynamic, flexible strategies in biological control, which are constantly evolving, in order to adapt them to the changing problems of each crop.

Rocío López, Technical Manager for Almeria, Granada and Malaga, explains that the proliferation of Tuta has been observed since the last campaign, “not just in the spring, but also in the autumn and winter.” For this reason, now more than ever, all the tools in our hands must be used, rationally. “The early detection of the pests, as well as the preventive auxiliary ones, which are released, is the keys to success for an effective control.” At Bioline Agrosciences, they are world leaders in the production of Trichogramma and, in particular, T. achaeae, which is a groundbreaking tool for the biological control of Tuta. López recommends a combination of N. tenuis from the seedbed and the use of T. achaeae when the pests appear. This auxiliary is a parasite preying on Tuta’s eggs, the only natural enemy that acts on this stage. It is formulated on controlled release cards and it is “the best ally for a reliable and effective biological control.” Additionally, when reducing the chemical treatments, the natural arrival of the parasite that feeds on Tuta larvae is encouraged, Necremnus tutae, natural to the region. “These natural enemies, along with cultural practices such as defoliation and other tools such as chromotropic traps, pheromones for sexual confusion… make an effective programme for their control possible.”

Aphids and red spider mites “are affecting all the crops in the region in a much more aggressive way, but mostly on peppers, cucumbers and aubergines, causing losses in the harvest due to direct damage and/or due to the virus diseases transmitted by the aphids. We recommend reservoir plants to control the aphids, using combinations of predators and parasites. We deal with red spider mites using several predator mites. We also opt for a greater diversity both inside and outside the greenhouses, using refuge plants.”

Bioline Ibera has Bioline Academy, a training department to instruct and train the technicians from their distributors, the company’s own technicians, along with farmers, in the most advanced biological control techniques.