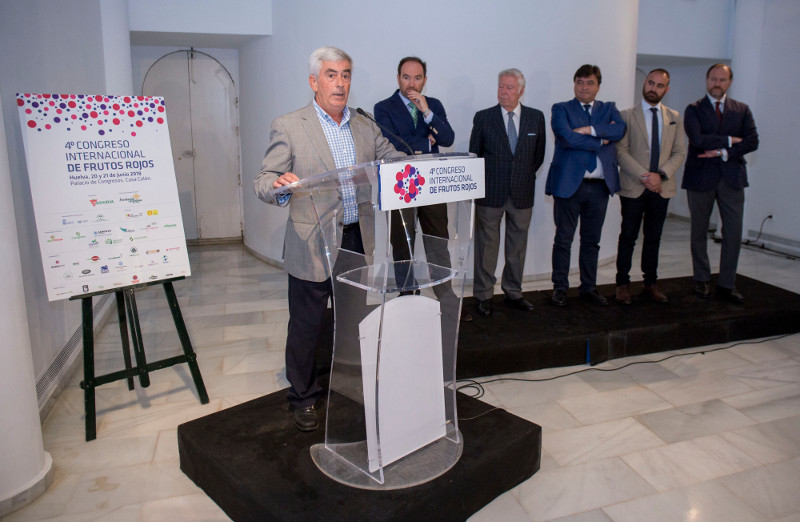 The International Red Fruit Congress was presented on the 8th of June at the Casa Colón in Huelva, the same venue that will host the event on the 20th and 21st of June.

The chairman of Freshuelva, Alberto Garrocho, announced that the opening conference will be given by the economist, José María O’Kean, who will cover the new challenges and the new opportunities of the sector.

Likewise, he thanked all the sponsors, collaborators and associate companies, partners and participants for their involvement in this Congress.

The chairman of the Fundación Caja Rural del Sur, José Luis García Palacios, was ‘delighted’ to be at another edition of “such a special” event, and the chairman of Caja Rural del Sur, José Luis García-Palacios Álvarez, emphasised the fact that the entire organisation is working ‘side by side’ to guarantee the future of a “fundamental sector for the province’s economy and one that is continuously innovating in order to grow.”

The Congress will have speakers from China, Dubai, Germany, Argentina or the United States, amongst other regions or countries, always aimed at reflecting al the concerns of topics of interest for the associates of Freshuelva, their worries and future aspirations; everything for the development of the province’s red fruit.

At this edition, research into new varieties by a reference country such as the United States will be one of the star topics of this event. The possibilities of new markets that are opening up for red fruits, such as China or the Middle East, as well as the trends being set by the European large supermarket chains will be other attractions set forth by the technical seminars.

The Congress’ complete programme can be consulted on: http://congresofrutosrojos.com/

PrevDelaying the problem… until when?
Fruits de Ponent is celebrating its 25 year anniversaryNext
YOU COULD ALSO BE INTERESTED IN