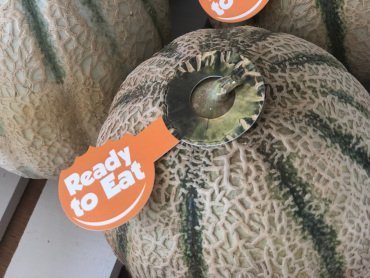 The company has given its products another turn of the screw with its best asset, innovation

Rijk Zwaan has completed its variety ranges and it already has a global offer in the main references. This is the reason behind the name, ‘The Total Solution’ of its Global Melon & Watermelon Event. The latest development they have presented is the Ready to eat concept, with which they are offering a complete range of Cantaloupe LSL with “two differentiated cutting points”: when a ring of micro cracking appears alongside the stem and when the skin turns from green to cream. Another added value is the resistance to aphids and powdery mildew, including the 3.5 strain throughout the line (except for Casasol RZ), which has made them “unique on the market”.

Another new concept is Galanas for Morocco, launched with Zerhoun RZ. “It has the genetics of the Galia and the size of an ananas. It weights 4 kg and it does not split,” Diego Maestre, Melon and Watermelon coordinator informs.

In conventional Galia, the ‘extended life’ for medium-late cycle in Murcia and La Mancha Venus RZ completes the range and in LSL, they have Salmeron RZ (Murcia) and Alcazaba (Almeria and Portugal).

Piel de sapo has been diversified into sizes and colours. For export, “a true mini”, 34-148 RZ, the smallest of its Zw line is offered. In specialities, they have 17P904, a Zendral type with crispy, orange flesh and greeny-blue skin.

In traditional piel de sapo melons, the experience in Brazil, where Flechaverde RZ has taken over 30% of the market as a brand reference is added to its rising evolution in La Mancha. And the sales of Mesura RZ in Almeria are also worth mentioning, where a very interesting project has been initiated with Unica Group, which “has started producing the variety with Melón de Autor”.

And the ‘Tropical’ line of round, seedless watermelons with “surprising” colours in skin and flesh is being launched, with examples such as one with yellow skin and red flesh that follows the line initiated by Tropical Sunshine RZ (black skin and yellow flesh).

The new developments in mini micro seeds 62-430 RZ (Crimson) and 62-356 (Tigre) could also be seen, reducing the number and the size of the micro seeds, even in the Sandissima concept.

PrevPip fruit, in the line of fire
New piel de sapo, yellow and charentais melonsNext
YOU COULD ALSO BE INTERESTED IN