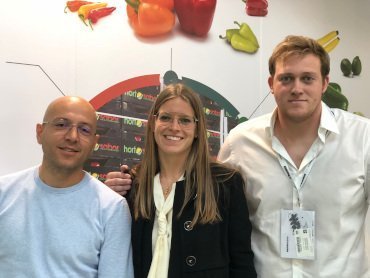 As Fruit Today advanced a year ago, Hortosabor has taken the plunge into the bio segment. And it has done this by setting up a new company, Solobio Mediterráneo Production S.L., which is exclusively devoted to this segment, producing the ecological version of fruit and vegetables that are already available in the conventional version through the parent company (peppers, courgettes, cucumbers, tomatoes, aubergines, melons and watermelons); iceberg lettuces, oranges and lemons from partner farmers in Murcia; and it will also market subtropical fruit such as avocados, mangos and custard apples produced by reliable partner farmers from the Costa de Granada and Malaga.

The commercial aspect will be carried out using programmes with distribution chains, Riccardo Salvi explains. Germany, the United Kingdom, Scandinavia, Holland, Belgium and Eastern European countries will be the main destinations, taking advantage of Hortosabor’s existing logistics and clientele.

In its first campaign, Solobio expects to close with a volume of 3 million kilos including all its references, while the forecast for next year doubles the figures and reaches 6 million.

The business group has consolidated its strategy with the creation of a logistics company, Frisur, along with the establishment of Hortosabor Italia, which is devoted to the most direct, efficient production and marketing on the Italian market. Aron Bitri continues to manage Hortosabor Mediterráneo, which stands out due to its almost 20% growth this year and in 2019 it finished the last phase of the extension of its installations in Las Norias (El Ejido).