Sustainability and food sovereignty, two sides of the same coin 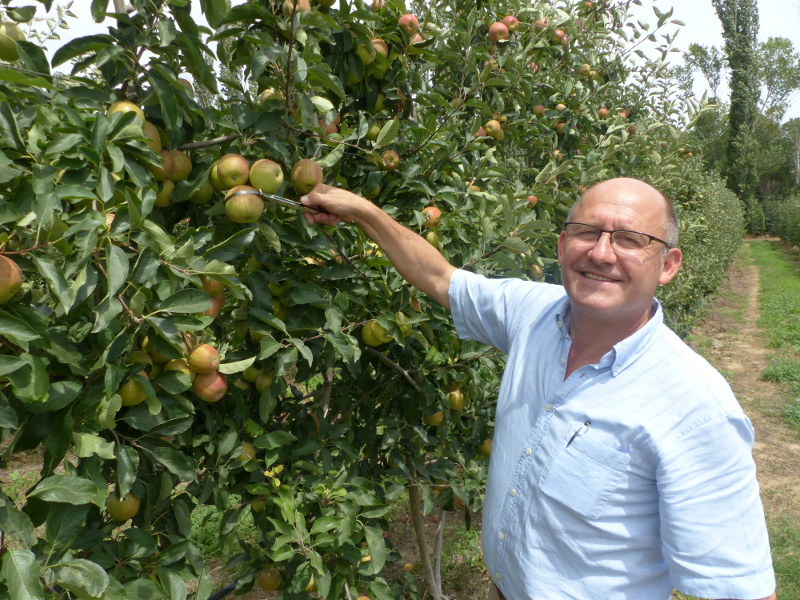 Fruit Today euromagazine talked to Llorenç Frigola, who took over the chairmanship of the PGI Poma de Girona a year ago.

Frigola puts the concept of sustainability and food sovereignty on the table.

The Catalonian apple forecasts are already known and now we just have to wait for Prognosfruit to officially give us the European figures. In any event, what valuation would you give to the volume of produce that we will have?

A priori, we know that the European harvest will show some data that are substantially lower compared to the previous season due to frosts in some regions. Poland suffered from an important reduction in its harvest, along with certain areas of Italy and France. With this global situation, the prospects for national production are promising. In Girona, we will continue supplying our extra quality because this summer is being highly favourable.

Are you referring to the fact that there could be less pressure on the Spanish market regarding apple imports?

Yes, indeed. It is obvious that if there is less foreign offer, the Spanish market can breathe easier. In fact, this has already been noticed over the past few weeks, even though there are still stocks of Golden.

What has the sector done so badly to result in 2 out of every 3 apples on the supermarket shelves coming from abroad?

Afrucat’s Observatory indicates that one of every 2 apples in the supermarkets is foreign (mainly from Italy and France). Regardless of the economic determining factors in each production area, which obviously play an important role, in my opinion, there are several key factors that explain the situation. On the one hand, the sectorial organisation with consolidation of the greater offer in these countries rather than in ours. On the other hand, the long-standing commitment by many European countries towards local produce, which results in a guarantee of priority by consumers towards apples from their own countries. To date, this trend has not occurred in Spain, or not with the same intensity.

For an educated consumer, concerned about sustainability in its widest sense (environmental, economic and social), it is surprising that it is easier to find a foreign apple rather than a Spanish one.

I believe that we are at the beginning of a cycle where the concept of food sovereignty closely linked to sustainability considerations are starting to seep into Spanish society. Obviously, this is already happening in our neighbouring countries: in France they are even talking about economic sovereignty, and in England the large supermarkets have valued national produce over imports for many years. It is something as simple as this: buy in your country, spend and consume what your country produces and finally pay taxes in your country, if you want to retire in it.

Our transport is minimal compared to other apple brands and other imported produce. I would remind you that 25% of the atmospheric CO2 , responsible for climate change, is due to transport. Food that can be produced locally should not come from places thousands of kilometres away. Buyers and end consumers are increasingly demanding explanations about sources, local produce, direct buying from producers, cooperatives and transport of shops and supermarkets.

Do you think that Spanish apples are up to the task in terms of varieties or do we need to renew them?

15 years ago, the sector as a whole organised the Fruit Futur association with IRTA and PFR, where they worked on the search for their own variety programmes and from Mas Badia in varieties adapted to our warm, sea-level climate.

In addition, I can assure you that technologically this sector is truly at the forefront, and it has the latest new developments regarding dynamic atmosphere storage. And in the fields, they have been making important investments in netting protection; the latest training and pruning systems are being adopted, such as the wall system or investments are being made in new irrigation technologies, such as the GiroReg project, which has meant 25% in water savings. Our future involves highly technological farming using the same surface area, producing more, but reducing the environmental impact. We are carrying out what the scientific world knows as sustainable intensification. We must be able to reduce both the water and the carbon footprint.

If we can take these elements into account, being the ones tomorrow’s society will demand, at Poma de Girona we already have the organoleptic quality and also the commercial reliability of the companies affiliated to this figure of quality.