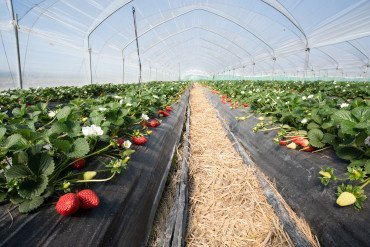 Nova Siri Genetics was born in 2005, launched by the young researcher Nicola Tufaro and Spanish technicians José and Miguel Arias. The company, with head offices in the Basilicata region, one of the most important strawberry growing regions in Italy, is devoted to research and experimentation into new varieties of strawberries and berries (such as raspberries with low requirements in cold weather conditions), concentrating its developments on the search for materials with excellent organoleptic and hardy characteristics, which adapt to the Mediterranean soil and weather conditions. They work using a licence system, receiving royalties for the number of plants produced by their licensees.

The company has patented 6 strawberry varieties and another 3 are in the middle of the approval process by the EU and different international bodies. This is the case of Marisol, which is exclusively controlled by Viveros California, which multiplies and markets it in many countries in Northern Africa, as well as in Spain and Italy. And Melissa, a material in which Spanish plant nurseries have placed their trust and that is present in Northern Africa, Spain, Greece, Portugal and Italy.

In 2019, the company’s most important new developments have been the strawberry varieties Rossetta® and Gioelita®, which they presented at Fruit Attraction, along with Marabella®, and they are already being marketed in Greece, Spain, Portugal and Italy. All of them are suitable for Mediterranean regions; they are characterised by their hardiness and, therefore, they have a significant capacity to adapt to different soils and weather conditions. They are also not very sensitive to disease and require fewer plant protection applications.

Rossetta®, very early and productive in the winter months, has a “very interesting” yield in January and February, according to the plant breeder. The fruit maintain a conical shape, a uniform red colour and medium to high Brix levels throughout the production period.

Gioelita® stands out due to its long shelf life, a very important aspect that brings greater guarantees for transporting to the destination markets. The fruit, with a very firm flesh, conical shape and red colour, has an eye-catching shine to it. The variety starts producing in mid-January and peaks in the first three months of the year.

Last but not least is Marabella®, the latest patented variety. It stands out due to its high productivity. It is very robust and suitable for exhausted soils. Its fruit is highly appreciated by shoppers and consumers due to its bright red colour and organoleptic characteristics.