Toni García, the will to succeed 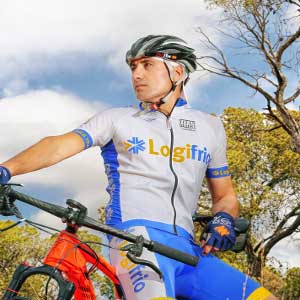 Toni (his real name is Jesús Antonio) is married to Pepa, who is also an executive at Consum. Born in Cuenca 46 years ago, his feeling of being a Valencian runs so deep that, following his land’s tradition, he is in charge of cooking the paella on Sundays. And if that is not enough, he is a member and great fan of Valencia C.F., because his passion before cycling was football, well, to be honest, it was Valencia.

He has always played sport, particularly football, but his age and injuries made him turn to cycling. He is not a weekend sportsman, but rather a seasoned strategist who likes to prepare himself to compete in extreme situations. Therefore, summer and winter, in hot or cold weather, every day he carries out his training sessions. Methodical and a person who likes to follow his planned agenda, he also schedules races throughout the year.

Therefore, the first one on the calendar is the ‘312’ in Mallorca, followed by the ‘Quebrantahuesos’ (bone breaker), in Sabiñánigo (Huesca), with mountain passes reaching over 3,000 accumulated metres of altitude and the third one, ‘La Maratona de las Dolomitas’ (The Marathon of the Dolomites), over the Alpine foothills in Italy, with the mythical mountain passes used in the Italian Giro race.

But the toughest of them all is still to come, the “Titan Desert”, a race that runs through the hostile land of the Atlas Mountains and the Moroccan desert, with a length of over 700 km and lasting six days.

I was a witness, and to some extent a participant, in his baseline training for 2016-17 in the Sierra Calderona, close to his house. Toni had prepared all the gear necessary and a bicycle, Pepa’s, who he says he “had deceived” in order to introduce her to this passion and share time together.

What type of physical training do you carry out for these races?

Here, in the Calderona, I do two types of training: one more aerobic, consisting of road cycling, which is necessary for trials such as the ‘Titan Desert’ and the skilful type, which involves mountain cycling, with ascents of around 600 metres. This landscape also allows you to do some road climbing, which helps you to maintain this rhythm on your bicycle.

When there are three months left before a trial, you get more demanding and start doing tougher series and routes. You have to arrive at the trial in shape, with a minimum physical fitness, regardless of whether something happens to you later on. The preparation consists of effort.

And what about your training sessions at home?

At home I usually do an hour and a half of knee work and I also work the upper body, since, although it might not seem so, this is very important for a cyclist. As the sessions are long, I take advantage and use them to go over the day’s mail or I watch the news.

I am a completely methodical person and I only improvise when absolutely necessary. I take a lot of what I do at work and use it to mark out the sporting goals I set myself at the start of the season.

What is your motivation for carrying out a trial as tough as the ‘Titan Desert’?

The truth is that it is a personal challenge, surpassing your personal limits. The knowledge that you can succeed at something that you decide on and you prepare for.

I believe it was someone from the sector who encouraged you to try out this new experience?

Yes, Eduardo Córdoba, who had already taken part. The truth is when we coincided there, I told him he was a b…..d, because it is one thing to imagine it and quite another to experience it. It is very tough; it marks you so much that I will have to repeat it. It has turned into a personal challenge.

Which is the toughest part of the trial?

Without any doubt, the trial itself is tough, but personally I think that the fact of sleeping in a nomad tent, after pedalling for around ten hours or showering in a hut, with a trickle of water, are extreme occasions.

The trial can run through sandy desert, where you cannot pedal and have to put your bike over your shoulder or up a stony 300 metre slope. At times, when you are completely alone, you start believing that you are lost, in spite of having the coordinates.

All of this without mentioning that the temperatures are very high and you need to constantly hydrate yourself, you can get lost, have a fall, an injury, gastroenteritis, your bicycle might breakdown, etc. the line between finishing the race or not is very fragile and often it depends on luck.

Taking all this into account, did you experience any moments of danger?

The organisation carries out a rigorous control. Although a Columbian cyclist got lost and all kinds of things went through our heads until he was found.

Do you prefer mountain cycling or road racing?

I am a road racer. I enjoy it a great deal more, but the ‘Titan’ brings both together, not just because there are roads, but also because the training we do as road racers is necessary for some trials.

Have you had many falls? I can see quite a few marks on your legs

Yes, a few. The most recent once occurred when I was in a group and all of them fell and the person next to me took me with him. Although most of my little scars are souvenirs from the ‘Titan’. Sometimes, when you are descending you take a risk to make up for lost time, you lose your concentration and you fall. The doctors immediately appear, they patch you up and you get back on your bike and continue the race.

Who is your idol in cycling?

Miguel Induráin without any doubt. Not only as a sportsman, but also as a person. I will always admire his values, his savoir-faire, when he let a colleague win a stage because he knew he was the leader of the classification. All of this says a great deal about him.

I saw that the barbecue at your house has a Valencia shield. Where does football fit in with your life now?

I have not abandoned Valencia. It is still in my heart and whenever I can, I go to watch them play.

Where do you spend your summer holidays?

As we travel a great deal, for many years now, my wife and I have made it a routine to spend a few weeks on the island of Ibiza, very peacefully, surrounded by our family.

PrevDon´t miss your chance!
A snapshot of aromatic herbs in SpainNext
YOU COULD ALSO BE INTERESTED IN