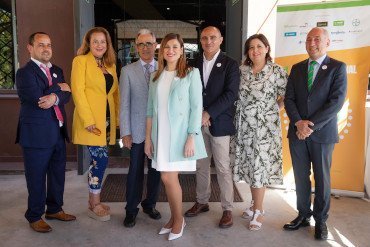 With the appointment of Toñi Piernas, the Association is starting a new phase with the first woman to head the organisation since its creation in 2010.

The new chairperson has been working in the world of broccoli as Marketing Manager for Campos de Lorca since 2011 and she was a member of the previous Management Board of +Brócoli for the two preceding years: “I am delighted to be able to defend this vegetable from the Chair of the Association. It is a true challenge for me to put it in the place it deserves, as Spain is the main broccoli producer. Over the next few years, we want to make the +Brócoli’s #meunoalverde movement (#ijointhegreen)” become completely internationalised,” she pointed out.

Piernas has mentioned that her main target at the helm of the association consists of ensuring broccoli consumption continues to grow, not only in the producing areas, but all over the country. She advanced that in Spain “we have already nearly reached 2kg per inhabitant/year and we will continue with the mission of spreading the benefits and properties of broccoli through actions at points of sale, participating in trade fairs and directly reaching society as a whole through social media to ensure that this figure continues to rise. For this reason, once again it is essential to connect the distributor and the consumer to transmit our slogan: ‘Broccoli, a healthy pleasure’”.

The renewal of the Management Board took place in Lorca, at the 10th Assembly of +Brócoli, which was also used to report the figures from last year’s communication campaign. Over 27 million people discovered the healthy properties and the excellent culinary features of broccoli thanks to the promotion work carried out through campaigns in supermarkets, promotion with influencers and actions on social media.