Oliver Huesmann, Living in the air

He admits that living with permanent jet lag allows him to eat at any time of the day and that it has even made him lose the feeling of being cold or hot. 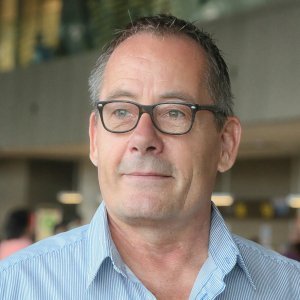 He admits that living with permanent jet lag allows him to eat at any time of the day and that it has even made him lose the feeling of being cold or hot. He has calculated, in hours, the time he spent on a plane last year: 63 days.

He has two passports and not because he has dual nationality, but because of a special authorisation by the German government due to his frequent flights. If he has to send one to any embassy for a visa, he needs the other one because he is still travelling.

Oliver Huesmann, a citizen of the world, was born in Munich 52 years ago. He is newly-married, since he tied the knot with his best friend barely a year ago.

His current residence is in Malaga, but in the near future he will set up house in Hong Kong with his wife and the youngest of his four children.

His work as a consultant and lecturer does not prevent him from being politically incorrect as he says what many people think, but do not dare to say.

You don’t have dual nationality, but you do have two passports?

Yes, and my passports have 48 pages instead of 32. I can fill one of them alone with entry and exit stamps in eight months.

My passports are German, but I feel very closely identified with Spain because it has been my country since the 1990s.

I believe that you enjoy virtually the same privileges on the airlines as a pilot?

Ha, ha… Well, I’m not exactly sure what they have, but my “frequent traveller” and loyalty cards give me certain services without any extra cost: free luggage, choice of seat, use of the business lounge, air miles that accumulate, etc…

Have you missed many flights?

No. Only once, when I bought a return flight on a date that was before the outward flight. I had linked one trip with another and I didn’t know what day we were on.

I have spoken to you many times and up to now I have never realised that your eyes are like David Bowie’s.

Yes, I have one blue eye and one brown. When I was a child, it was clearly specified on my passport, but now it is no longer mentioned.

What memories do you have of your childhood?

When I was 6 years old, my father, a top executive at Siemens, was transferred to Brazil. We lived in Copacabana, as a European family with a certain standing, but I used to slip away to the favelas to play in the streets with other children of my age. I felt like one of them. They played barefoot and I could wear a German shirt, but I never got into any fights.

It was a very happy period in my life. With my father, the chances were that I could be attending an elegant company cocktail party or camping in the Amazon jungle for a few days with a native tribe.

Wow! What incredible experiences for a child!

Yes, they were, and they gave me a very open way of looking at the world, and they taught me to not have any prejudices.

Was your youth as intense?

In Germany, it is very normal to leave home when you start university. I studied Economics and Logistics, and when the summer came around, unlike my friends, who usually worked as waiters, I looked for the way to earn more money and I became a truck driver. My first contact with the world of fruit occurred thanks to transport which, moreover, allowed me to discover first-hand, how the business is developed. I did the Huelva-Vienna route, virtually non-stop and I arrived ahead of time, which meant a reward of 1,000 marks from the buyer. Of course, in those times you could do crazy things because there weren’t the same controls as there are today.

You were a smart kid

Well, on the ball. This was when I began to understand the importance of logistics, with regard to perishable goods. If I earned 1,000 euros more than the going rate, it was because the recipient of the truck-load of strawberries earned a great deal more.

You are a very talkative person, but you are also very given to saying what you really think, without dressing it up at all, is that right?

Yes. Things get sorted out by straight talking. Why beat about the bush or hedge your words when there is a problem? Spain has a competitiveness problem and the blame is usually passed on to others. We should stop navel-gazing and think that “fruit and vegetable globalization” is a fact and it will increase. My role as a consultant is to support the Spanish and European sector so that it can survive and improve. All the information I discover on my trips is aimed at having a global overview and to improve our position on the markets. There is a very Europe-centred view of the world and the weight on the scales is sliding towards the Asian countries and it will soon move over to Africa.

Why are you moving to Hong-Kong?

We have chosen this point because it is 5 hours from all the Asian destinations. My current job is on this continent and I will have greater quality of life and will be closer to my wife and daughter.

I once saw you at seven in the morning, in Shanghai, having breakfast, skilfully using chopsticks and I thought: What a way to complicate your life at this time in the morning when it is so easy to use a fork!

Everything is a question of getting used to. The trick is to hold one of the chopsticks still between your fingers and only move the other one.

What do you do at weekends when you are at home?

The truth is that I have very little social life, but my family is enough for me. My wife is my best friend and we both love to have a good barbecue. Today, when I get to Malaga, even if it is 10 pm, we will have one. My wife has all the ingredients ready.

I have three good friends: one in Brazil, another in Germany and a third in Hong Kong. There is no problem with the distances because we are all connected.

Do you think you will you ever retire?

Yes, of course, but by then I hope to be living in Germany. Everything is more organised there and I think that when you reach a certain age a little more organisation is needed. We’ll see.

PrevToñi Piernas, +Brócoli’s new chairperson
Reactiva and Groupe Carso at Fruit AttractionNext
YOU COULD ALSO BE INTERESTED IN