Watermelons and melons: with the sights on tourism 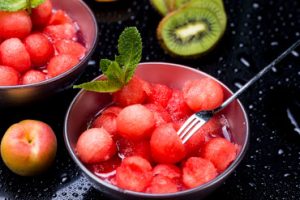 With the lockdown easing process and the summer season in full bloom, this year’s particularity is that the sector is mainly focused on whether tourists will come or not.

Both melons and watermelons are fruit that fill the buffets in the hotels for breakfast, lunch and dinner. Spain is the second tourist destination in the world, with 84 million visits. Whether these travellers arrive or not will have a significant effect on consumption.

This uncertainty has meant that Castilla-La Mancha, the production region that coincides with the peak tourist season in our country, has decreased its production estimates and therefore, has applied an important reduction to the surface area. Sources consulted by this magazine explained that “the most important idea is to avoid a surplus of offer that makes the product price drop during the period with greatest demand.”

Although at present Murcia and Valencia are already in full production, Castilla-La Mancha will start very soon, and it is already preparing with 20% less surface area compared to last year, when they cultivated 6,182 hectares of melons and 2,635 of watermelons.

The idea is to cushion this uncertainty in consumption by avoiding any surplus in the offer that might cause a sudden drop in prices, “always taking into consideration a real scenario of less foreign tourists visiting Spain this summer and even a possible new outbreak of Covid-19 that could distort the situation again,” reliable sources comment.

Furthermore, as the season is unfolding, Castilla-La Mancha is looking with some misgivings at the campaign in Murcia, the tail end of which overlaps their campaign and that could cause a surplus of produce.

Contrary to what has happened to Piel de Sapo melons, watermelons are maintaining a highly differentiated commercial journey, since 90% of their volumes are marketed in Europe, where it is a very popular fruit when the weather starts to get hot.

The province of Almeria is the largest producer and exporter of this product with figures that reach 10,600 hectares, virtually the same amount as the previous campaign. Unlike what has happened with melons, watermelons continue to show a rising consumption trend. The introduction of seedless or micro-seed varieties, with a uniform flavour has increased their popularity.

New formats on the market

Spanish consumers have remained very traditional in the consumption of these two summer fruits and they have always tended towards Piel de Sapo melons and black or striped watermelons. Both products, either whole or cut, and particularly when the Covid-19 epidemic meant that the halved fruit on the supermarket shelves was cancelled, experienced a considerable drop in sales. However, it is a sector with an important innovative disposition and there is never a campaign without new references appearing in the fresh-cut convenience food range: just melon, or watermelon or mixtures and even ready-to-eat melon with ham formats (Melón de Autor).

Furthermore, Spanish consumers have already become used to seeing references of Cantaloupes, yellow melons or other varieties with unusual appearances, such as the Matisse melon (Procomel), LiLilup or Waikiki (Jimbofresh). And this doesn’t take into account the fact that the trend for both fruits is moving towards smaller sized formats, where some companies have already spent years dipping their toes commercially-speaking and they don’t seem to be doing badly. One classic is the Mini Oro from Algitama or the recently launched Petit Autor, from the Melón de Autor company.