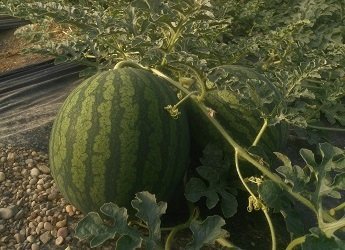 Watermelons no longer being sold in quarters and halves has dragged sales down at the start of the campaign, with prices below costs.

Uncertainty. This has been the word most repeated amongst watermelon producers since the beginning of the healthcare crisis. After the first few days of bulk buying mass hysteria, consumption stabilised and fruit such as imported watermelons started to get left on the supermarket shelves. “There are no street markets, the Horeca channel is closed and virtually everything has been left in the hands of the large supermarkets. Imported fruit is not being sold,” Juan López, manager of PozoSur, corroborated to Fruit Today in week 12. And there was another problem added to this drop in sales, or perhaps it was precisely one of the factors causing it: the stopping of watermelons being sold in quarters and halves in supermarkets such as Mercadona and Consum.

This step was taken following recommendations by the Health Ministry, which urges handling food as little as possible. But the truth is that, with the ‘confined’ refrigerators, chocker-block full of products, this means a curb on the purchase of large pieces for consumers.

In week 14, Andrés Góngora, in charge of fruit and vegetables at COAG and provincial secretary for COAG Almeria, advanced that this step had meant “a considerable drop in sales” in spite of motivating attempts through offers on the RRP.

Góngora warned that a “very serious problem” would occur if the situation were not to change. And the reality is that in the first days of the national watermelon harvest, prices were around 0.30-0.40€/kg. Ridiculous prices that are below production costs.

“In spite of the fact that there are hardly any watermelons, as always, the same people, the supermarkets and marketing companies, want to take them off our hands virtually free,” he indicated, keeping in mind that the new agrifood chain law “obliges payment to be higher than the costs.”

We will have to wait and see how the next few weeks develop to determine whether the season can be saved. At the moment, farmers have created the slogan ‘I’m not selling my watermelons for less than 65 cents’ and at COAG they are asking the Andalusian Government to start up a promotion campaign for local consumption.