SweeTango® is looking to win over more and more consumers, thanks to a boost in communication and word-of-mouth for its distinctive and unique qualities, such as unbeatable crispness, freshness and juiciness. 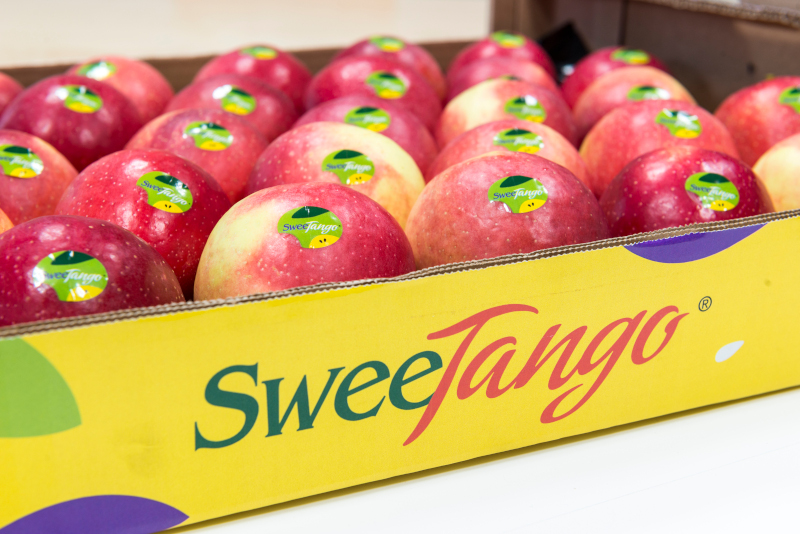 The curtain rises on the major international fruit and vegetable event in Madrid. One of the most captivating new apples in recent years cannot be missing among the protagonists.

It is SweeTango®, the ruby red apple naturally compared to a summer fruit due to its characteristics. It is indeed juicy, thirst-quenching and socrunchy. So much so that it won a Guinness World Record.

SweeTango® is an apple with a distinctive taste, to which is added the unique experience of biting. It is indeed crunchy and juicy. Thanks to its structural composition – the size of its cells is twice that of any other variety – it results in maximum crunchiness combined with the perfect blend of sweet and sour. This genetic peculiarity of SweeTango makes it one of the most valuable apples.

The European pool created specifically for the positioning of SweeTango®, consisting of five producer countries, Italy, Germany, Spain, Austria and Switzerland, arrives in Madrid to explain the project that aims at the premium positioning of this apple throughout Europe.

There are many, among operators and the public, who now start to recognise the bright colours of its brand in the fruit and vegetable department, strongly desired differently from the competition, thanks also to the strong investments undertaken in communication in several Countries: social campaigns (which focus on the image of the fresh and crisp summer apple #summerinanapple, with a creativity developed in Feed & Story for both Instagram and Facebook), but also articles and advertisements in the specialized European press, as well as a major engagement project through SweeTango® Europe’s official social channels (last season, the total users reached through campaigns on Facebook and Instagram channels were over 2 million).

And among the most impactful communication projects, the initiatives in Italy and Germany stand out: in Italy SweeTango® made its debut on the main national TV & Web broadcasters for the first time and in Germany it was the subject of a never-before-seen challenge with the catchy name ‘Crunch the world record apple’, which was also promoted in Austria and Switzerland, where 7 Apple Watch Series 7 were offered as prizes.

Thus, some direct comments from the producers of SweeTango® about the activities in their country:

Andrea Fedrizzi, Marketing Manager of Melinda sca: ‘SweeTango® is the latest big news for us and it’s giving us great sell satisfactions. Certainly the TV commercial gave a big boost, but the market is rewarding our investments, because this is an exceptional apple due to its characteristics, covering a premium segment of demand that has been missing for years in our sector thanks to its early availability”.

Wolfgang Kreiser di Red Apple Germany GmbH: « We worked together with German customers to implement different measures and support the “Crunch the world record apple” challenge. Our competition can also be found on the Edeka homepage. At th beginning of September we had a couponing promotion in the Edeka-App where the customers received a discount for the SweeTango® Apples. Furthermore, 160 promotions in different locations of Edeka were also activated. We also worked with Famila, organizing 25 promotions in different locations  to make customers aware of SweeTango®, let them taste this extraordinary apple and make them aware of our challenge! ».

Corinne Kocher, marketing manager at GEISER agro.com ag: “The SweeTango apple helps us to serve our consumers with a harvest-fresh, crispy, juicy and tasty apple, especially as an early variety in the summer months.

It contributes to a successful start of the new apple season and is listed nationally with the two largest retailers.

Because the SweeTango apple is only available in Switzerland from August to the end of October, we always feel a great demand and anticipation for the launch of this unique apple.

On the marketing side, we accompany the young brand with various activities at the start of the season, such as samplings and regional campaigns, to raise awareness among consumers and make the SweeTango® apple tasty in summer.

We are particularly pleased with the positive feedback from consumers and the lively participation in the “Knack den Weltrekord-Apfel” competition”.

I would like to emphasize that SweeTango® is not just an apple, it is a project,” – concludes Jurg Burri, the European variety manager of SweeTango®. Like all projects, it follows a detailed plan of action: there are scientific aspects, agronomic features, commercial projections, but it all revolves around a brand, this we will never forget. That’s why communication is so important to us.

We wanted to build a world around the apple, precisely because we believe that the consumer can become attached to the SweeTango® brand, a distinctive brand, recognizable in the fruit counter, with bright colors that refer to a fresh image, with a summer association. ‘Summer in an apple’ it is in fact the claim that covers the entire communication campaign, from the packaging to the deco of the point of sale, up to the merchandising”.

And to savour the flavours and colours of summer for a while longer, an event has even been dedicated to SweeTango® in Madrid, with music and surprises, as is rightfully reserved for true queens.

So, concludes Mercè Calvo, from the Marketing Department of the Spanish Nufri Group: Sweetango is presented at Fruit Attraction 2022 with a daring and fun proposal. It gathered in the center of the south entrance of IFEMA press, customers and reps from the commercial sector to announce that it was new, tasty, refreshing, very crunchy and above all summery, through a space decorated in the most sweetango style, DJs and cocktails made with the most summery apple on the shelf, Sweetango».

PrevAM FRESH Group acquires a controlling interest of Fruit-X
ASIA FRUIT AWARDS: winners announcedNext
YOU COULD ALSO BE INTERESTED IN