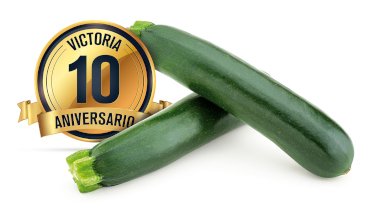 HM.CLAUSE’s courgette is celebrating its anniversary in great shape

On the seed market, celebrating a decade with the same variety is not common. HM.CLAUSE has managed to do just that with Victoria, an “unmistakable” courgette for the early autumn and spring cycle in Almeria. Raimundo García, sales delegate in El Ejido, lists its advantages: very plastic, highly productive, well-adapted to the heat and with a raised parthenocarpy, “almost 100% of the fruit are sellable (no misshapen fruit).

The seed company offers a complete catalogue in courgettes, according to plantation date. The first variety is Gloria (extra-early cycle), very early with an excellent adaptation to heat, it is recommended from the 15th of July to the 10th of August. “It grows quickly; it starts and finishes before others.” It is followed by Victoria, for plantations from the 10th of August to the 15th of September. Both varieties stand out due to their very high quality and good post-harvest. They are very productive, with a medium green colour and good pistil closure. “Choosing one or the other depends on the time they are going to be grown in the greenhouses.”

In the intermediate segment, they recommend Mítica, for plantations from the 10th of September to the 10th of October (planting before the 10th of September should be avoided because their robustness is greater than that of Victoria). They are handled using slightly nitrogenised fertiliser before starting production. This variety has been on the market for two years now and it is HM.CLAUSE’s response to demands for darker-coloured, shinier fruits. The fruit are slightly shorter and very straight.

For winter productions, they offer Musa and Sinatra, for plantations in October and November. “Musa is earlier and offers a better post-harvest, and Sinatra, “the winter king”, is slightly slower, although it has the greatest total production of the entire late segment.”

For the end of the winter, they recommend Mítica, Victoria and ending with Gloria in late spring.

Gloria, Victoria and Mítica are resistant to Px, ZYMV and WMV, and Musa is resistant to Px. The company’s development strategy, aimed at the most popular typology, the green courgette, includes continuing to extend the resistances, seeking solutions to the New Delhi virus and a high level of parthenocarpy. They are also researching into how to increase the post-harvest and they have a pre-commercial variety for late cycle that will be promoted to move on to the commercial phase next year.