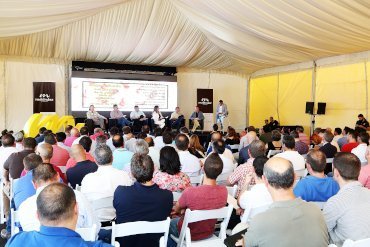 The 1st Seminar on the Future of the Potato in Spain brought together almost two hundred professionals at the installations of Patatas Meléndez in Medina del Campo (Castilla y León).

The event included two individual talks given by José Manuel Peláez, Chairman of the Europatat Work Council and Javier Boceta, CEO of Meijer España. Peláez forecasted a “promising future” for the potato sector following the growth of production in Spain in recent years, while Boceta emphasised the commitment by companies like Meléndez “to moving forward and having Spanish New Potatoes in the month of May.”

The panel discussion “Potato prices for farmers and the chain of value” involved the chairmen of the four Professional Agricultural Organisations of Castilla y León, as well as representatives of the potato operators. During this discussion, they all acknowledged the need to bring price stability to the sector, as well as backing the inter-professional nature of the potato to gain weight in negotiations.

Lastly, Javier Meléndez, CEO of Patatas Meléndez, closed the Seminar by emphasising the work by Patatas Meléndez in recent years, backing quality, technification and the automation of the installations, and particularly, the professionalisation of the sector through the “formalisation of contracts with the farmers that guarantee that everyone receives a fair price for their work“.

Meléndez placed value on his company’s Agricultural Scheme to work hand in hand with the farmers and to improve its presence on the market and he explained that the company’s Plan for the Future involves “continuing to grow in order to uphold its position as the leading company in the potato sector in Spain”, with a market share of 18%, 170 million kilograms marketed in 2018 and 250 workers, as well as forging ahead with the modernisation strategy in order to also become a reference in Europe.