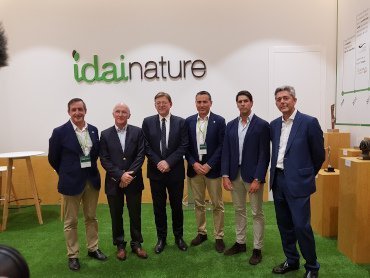 In July, this company from Valencia threw a great party to celebrate its 10th anniversary

Under the slogan “We are still different”, they held a great event with the participation of David Meca and live music by Los Secretos and Siniestro Total.

The event took place in Pobla de Vallbona (Valencia) and it brought together clients, suppliers, associates and friends. They also took advantage of the occasion to inaugurate the most sustainable building in the world, which received the First World Prize for Excellence in Sustainable Architectonic Design.

Idai Nature, dedicated to preparing natural insecticides and biostimulants for the production of fruit and vegetables without leaving any chemical residue, is celebrating its tenth birthday exporting to 35 countries, with an annual invoicing of 20 million euros and the future challenge of being present in one hundred countries in 2023.

The key to Idai Nature’s success has been to never stop innovating, “all the profits from the first years were dedicated to continue investigating to develop new products. To continue growing, we had to offer farmers natural, effective solutions that would allow them to become more profitable and to gain access to more markets,” states Carlos Ledó, CEO and founder of the company.

The event was attended by the President of the Generalitat Valenciana, Ximo Puig, who opened the sustainable building and the Mayor of Pobla de Vallbona, Josep Vicent.

The CEO of Sapec Agro Business, Eric Van Innis, also attended, emphasising the enormous task performed by Idai Nature, which has formed part of the activity of the Sapec Agro Business Group since January 2018, and today is considered the leading company in natural innovative solutions for environmentally friendly farming.

Before the official event, the guests were able to visit Naturalia, Idai Nature’s experimental farm. Antonio Cerveró, the company’s technical manager, explained that on the farm the trials for its products are carried out on all types of crops: vegetables, citrus fruits, tropical and stone fruits, vines, potatoes and leafy crops, amongst others. It is also a training centre for workers from the company.

Prev1st Potato Seminar
Manel Simón, manager of AfrucatNext
YOU COULD ALSO BE INTERESTED IN