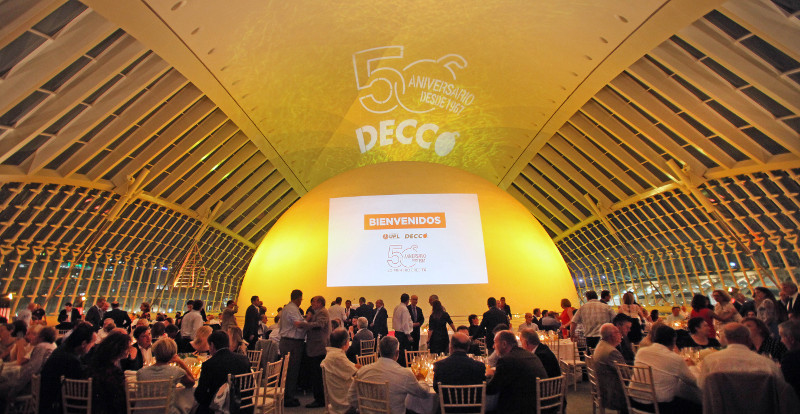 The company celebrated its anniversary with a large event in the Hemisfèric of Valencia’s City of Arts and Sciences.

A total of 265 guests attended the event, held last September, including executives, employees, media outlets and company clients. It is worth highlighting the presence of the General Director of Decco Ibérica, Miguel Sanchís, the President of Decco Worldwide, François Girin, and the Marketing Director of Decco Worldwide, Daniel Alabadí, as well as Juan Carlos Ladaria, Enrique Alegre and José Juan Cortina.

The evening featured images from Decco’s 50-year history, which were projected onto the Hemisfèric’s dome, as well as a list of hit songs from the last 50 years that was created specially to celebrate the anniversary.

In the talks, François Girin highlighted the quality of the human resources making up Decco Ibérico and underline the historic moment being enjoyed by the company: “We are writing the history of the next 50 years,” he declared.

For his part, Miguel Sanchís thanked the guests for their attendance at such an important moment for the company and was especially grateful for the effort put forth, day in day out, by Decco’s workers to provide its clients with the best service.

The talks were followed by the evening’s main feature, a show presented by the “Viviendo del cuento” company, which highlighted Decco Ibérica’s history through the decades and their milestones: In the 1960s, the foundation of the company, in the 1970s, the move from Quart de Poblet to larger installations in Paterna, in the 1980s, new technological innovations and the launch of star products such as Kenopel 20 and Deccoprozil, in the 1990s, adapting to new problems in the sector with products such as water purification equipment or the Deccodaf fungicide dispenser, and in the 2000s, the launch of the zero-waste line and the new-generation fungicides Melanite and Deccofos.

PrevSorma Ibérica is growing
Poland and Spain, a brotherhood for broccoliNext
YOU COULD ALSO BE INTERESTED IN