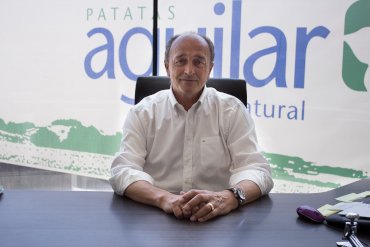 The Spanish state of alert and the confinement have increased fresh potato sales in Spanish supermarkets. The suppliers with the greatest capacity and experience have survived this with flying colours. This has been the case of the company from Valencia, Patatas Aguilar.

“Today we continue having a demand that is 70% higher than normal, but the ‘worst’ has already passed. In March, orders increased by 300%, according to the company’s manager, Vicente Aguilar.

“It was a time when the company’s entire industrial and human resources were put to the test, a complicated moment, not technically because we are ready, but regarding human resources. Our employees have been true heroes.”

The company, which as of today has returned to its two regular shifts, although reinforced with a 55% increase in staff, had to increase its production and work 24 hours a day with three shifts, 7 days a week during those days. Now the situation has stabilised, and as has as occurred to all the suppliers that serve the distribution chain, during the days before and after Easter, the demand has been very active, exceeding 70% of a normal situation.

Technologically speaking, the company was prepared for the situation, as it has recently concluded its three-year investments, coinciding with the company’s 50 year anniversary. The production capacity was extended with the implantation of precision technology in selection and sizing, in high capacity washing machinery, as well as in weighing machines and process automation.

“Currently, we are immersed in the new three-year plan that contemplates an investment of over 4 million Euros, to extend the current installations in Riba-Roja, improving the processes with state-of-the-art technology and enlarging the product reception and storage area”, Aguilar states.

With respect to this exorbitant demand by retailers, the wholesale markets, where the company is present in three (Mercavalencia, Mercovasa and the Mercado de Castellón), have suffered. “A great deal of produce is sold at the markets for greengrocers, central markets, street markets and the Horeca channel, which have seen a lower turnover. In emergency situations, people tend to shop quickly, in large supermarkets and they are not prepared to spend longer in the street than is strictly necessary. In spite of the situation, sales in the wholesale markets are beginning to pick up and become more stable,” the executive comments.

Other business lines, such as pre-prepared and pre-cooked food have had to put up with very different situations. For example, the demand for pre-cooked dishes has seen an important increase; however, the pre-prepared range, which mainly goes to the HORECA channel, has seen its volumes drastically reduced.

Regarding what the sector’s scenario will be after the confinement, the executive explains that potatoes are produce that are always present in the shopping basket. “In 2008 we didn’t sell more potatoes because we were in crisis. We sold the same amount, but the profit margins were lower and, often, we supported each other, with our customers, using important promotions.”

“We have to think about consumers, and being at our customers’ side, to be able to give a suitable response to an adverse economic situation, which I am sure we will overcome together and it will make us stronger,” the executive remarks.

A current of solidarity is flowing around the world and the company from Valencia is following this trend. When the confinement comes to an end, Patatas Aguilar will have donated around 400,000 kilos of potatoes to the Food Bank and to different charities. This is not a one-off donation, it is a policy that its executives have been carrying out for many years, but they have always been guarded when talking to the media.

(This magazine is well aware of the important development work which, alongside the Fundación Vicente Ferrer, the company has been carrying out in India for many years).

This example of corporate social responsibility does not only touch society as a whole, it also affects the company itself. An example of this is the 25% wage increase for employees to thank them for their effort during the month of March, applied retroactively and that will continue until the pandemic has ended. “It is only right and proper to be grateful” the executive concludes.