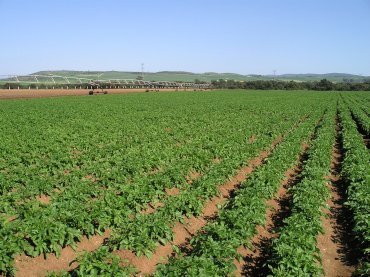 New Andalusian potatoes are starting to appear on the market, in a context of important demand for fresh potatoes all over Europe.

The 2020 harvest shows good quality, with an increase of around 7% in surface area. The weather conditions have been very good in April due to the moderate, persistent rainfall that has alleviated the drought of previous months. The first potatoes reached the home market in week 17.

Pepe Porcel, manager of the company from Seville Distrisur, explains how this upturn in sales is due to the confinement: “After the stockpiling in the first weeks, now the increase is due to the fact that we are at home and we have more time for cooking.”

Not only has the washed potato segment experienced this upturn. Once the confinement became “normalised”, potatoes for industry to prepare crisps also increased. “With restaurants and bars closed, consumers have opted for having an aperitif at home.”

Distrisur is preparing its programme for Germany from the 27th of April. That is to say, a week earlier than last year. The German market is eager for potatoes in the supermarkets because sales have shot up there. “With this situation of high demand and constant decrease in stock, we think that the new potato campaign could be quite favourable, although it is true that this health crisis means an important upheaval and we could have logistical problems such as an increase in transport prices due to the absence of returns,” Porcel explains.

Two sides of the coin for the same product

The negative part of this situation involves potatoes for the Horeca channel, not only in Spain, but throughout Europe. There has been a significant drop in demand for frozen potatoes in central and northern Europe.

In Spain, with hotels, restaurants, bars and communities closed, the frying potato segment has been drastically reduced. Traders and farmers from Castilla y León have an important stock of potatoes with very little commercial outlet and that, given the long-lasting confinement circumstances, could lead to many small businesses going bust.

“I don’t think it is fair to leave businesses to die in Spain, while goods continue to be imported from outside the country. It is a time for solidarity amongst farmers and traders, who are seeing how the situation gets worse on a daily basis. Today, it is their turn, but tomorrow it could be ours.”

“From my point of view, we should increase national potato orders at the expense of imported frying potatoes. At least, this crisis should teach us something. Importers are already realising that they are doing France a great favour and a huge disservice to Spanish farmers.”

And regarding this important dependence on France, Porcel comments that this is the time to reconsider the situation because Spain could produce many more potatoes. “We have packaging companies that are gradually increasing their contracts in our country. Today, there are highly professional farmers who are ready to take on serious, stable commitments with the distribution.”