Amela®, a turning point for tomatoes 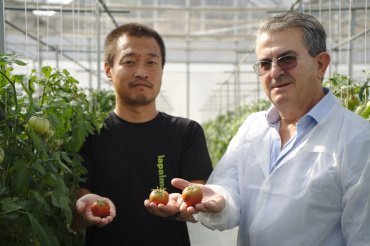 Talking about the cooperative Granada La Palma and about tomatoes and specialisation is one and the same thing. They have flavour in their DNA. Their good work is widely recognised and it is backed up with milestones such as the one that they carried out 30 years ago, when they introduced cherry tomatoes onto the market at a time when they were virtually unknown and the standard was for long shelf life. They correctly identified a suitable variety, “all rounder and with flavour”, Josefina, and they managed to mass produce it 12 months of the year and place it on supermarket shelves, first in the United Kingdom and then in the rest of Europe. As the years have gone by, they have added references and have specialised in the production of mini-vegetables and other products, always following the same principle: flavour.

Now they are marking out a new turning point in the company’s history with a product that will revolutionise the specialities market: Amela. A result of the merging of knowledge amongst the agents from the entire chain (from the seed to retailers), it forms one of the company’s most ambitious projects.

In order to set it in motion, they have created a joint venture, Sun Farmer Iberica, a mixed Spanish-Japanese company to which they have devoted 6 years and an important investment for the future. And the fact is that producing Amela is not easy. It has a complicated know-how of over two decades behind it, acquired by the original promoter of the idea, Masa Inayoshi, chairman and founder of Amela, which today is a highly prestigious tomato, a leader on the gourmet market in Japan.

Fruit Today was able to enter the “temple”, where a tomato that requires important care, cosseting and dedication is grown. A space that seems to transport visitors directly to Japan, since its cultivation system has little (or nothing) to do with the systems seen in Spain and every detail, even some that could seem minimal, such as some scissors, come from Japan. At the centre of everything is Mido Keisuke, “the best producer of Amela,” who has come from Japan to fine tune the project in Spain. He is in charge of monitoring a complex automated control system of all types of parameters (water, temperature, humidity…) to achieve the ideal conditions to be able to produce a tomato with exceptional qualities, 12 months of the year.

In Japan, pink tomatoes have traditionally been most popular. Inayoshi started to investigate to find another route and he came up with Amela. “It has a flavour that differentiates it 200% from any other typology,” states Carmelo Salguero, sales manager at La Palma. The name, Amela, gives a clue: “in the Japanese Shizuoka dialect it means ‘sweet’.” But it is not merely sweet: it has a perfect balance with other components (malic acid, citric acid…) and an intense aroma and a pleasant texture that make each bite a highly pleasurable, different sensorial experience. This is only possible with “a production system based on sacrificing kilos”, which results in flavour excellence.

Every tomato marketed under the brand Amela is a little ‘gem’. And, therefore, they are presented in carefully designed, environmentally-friendly packaging, with tubs of 160g, 280g and 350g, in boxes of 1 kg and 2.4 kg or loose. In Spain it is available at El Corte Inglés, in the fresh produce section and the online supermarket, and outside our borders, in Coop Schweiz. “At present we have a very reduced production and next year the idea is to double the surface area.”

On the 22nd and 23rd of October on their stand at Fruit Attraction (9D06), visitors will be able to confirm the goodness of Amela through tastings and show cooking by the Spanish-Japanese chef, Naumi Uemura. Don’t miss this merging of cultures, knowledge and flavour.

PrevKaramel: flavour and health
The tomato is becoming smotheredNext
YOU COULD ALSO BE INTERESTED IN