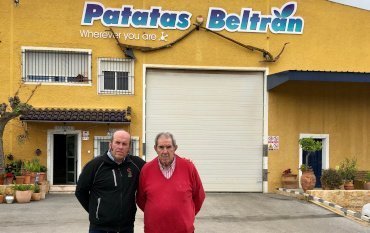 The company from Alicante forms a unique universe within its sector due to its exclusive know-how at source, which it combines with different business lines.

Around 1,700 hectares in different Spanish provinces allow the company to produce early and mid-season potatoes.

With the harvest recently started in Cartagena, José Beltrán, manager of the company, talked to Fruit Today about all the hottest news.

What are the prospects in the Campo de Cartagena and which varieties stand out? Do you still have production in Andalusia?

The quality of the harvest in Cartagena is very high and it has benefited from the latest rainfall. In general, there could be a small reduction in surface area, although this will not be very significant. Our forecasts are for around 25,000 million kilos. No one variety stands out as being much more successful than the others; we are growing more produce on demand to cover all the market niches in Europe and in Spain.

In Andalusia, we still have production, but it is more focused on varieties for industry; an industry that at this time of confinement is in great demand, because Spaniards, after many days without leaving their homes, are upping their purchases of crisps and snacks.

Patatas Beltrán is based on the source; we know how to produce and our 50 years of experience backs us up. We have always been convinced of the value of national produce compared to imported potatoes.

With the diversification of your activity, do you have a work line that supplies the Horeca channel? What is your experience of the health crisis?

It is as if time had stood still since the 14th of March. There is no activity. To date, we had had some spectacular sales and we were at a moment of high provisioning due to the ‘Fallas’ and the Easter holidays. Suddenly, everything stopped short. This occurred for around 3 weeks, but as we have maintained our other business lines, we are amongst the privileged few. Now, we are concentrating all our efforts on the new potato harvest from the Campo de Cartagena.

In general, what has the year been like for Patatas Beltrán?

We have had a spectacular campaign this year, beating all our sales records. Good prices, a good harvest and high export figures. We have grown on all the different types of market and we are very satisfied.

Which potato varieties will be most popular in the immediate future?

Without any doubt, the varieties that are good for washing. It is a trend that will not stop in spite of the importance of the traditional channels, which are still very important in Spain. The supermarkets have carried out incredible work in the area of specialisation and they are extending the washed potato culture that already exists in northern Europe.

We have two varieties that respond well to this type of demand and that have very good production behaviour. They are Vitalia and Elmundo, varieties from the Dutch company Stet.

Where does this leave unwashed potatoes?

I think that they will maintain a market niche, because there are varieties such as red potatoes from Cartagena which have a good shape and that have an important presence, which keep up an active export business for us, in a box format.

As significant suppliers for the industry for fried produce, do you have any new varieties on your catalogue?

This year we will carry out trials with the variety Bricata, a very versatile potato, which gives very good results for the industry and at the same time, is excellent as washed potatoes for the large supermarkets. It is an important commitment.

What are the company’s new challenges?

As specialists at source, our investment policy is highly active in the fields: we are constantly investing in good machinery, such as tractors and tanks for fumigating. And we will also renovate the storage areas due to the new regulations on anti-germinating products.

And in the more commercial field, the future actions will centre on creating our own brand with specific containers and packaging machines to give greater value to the end product. Furthermore, we want to start up a launching strategy on social media to ensure that consumers value us.