Blueberries: worldwide increase for both crop and consumption 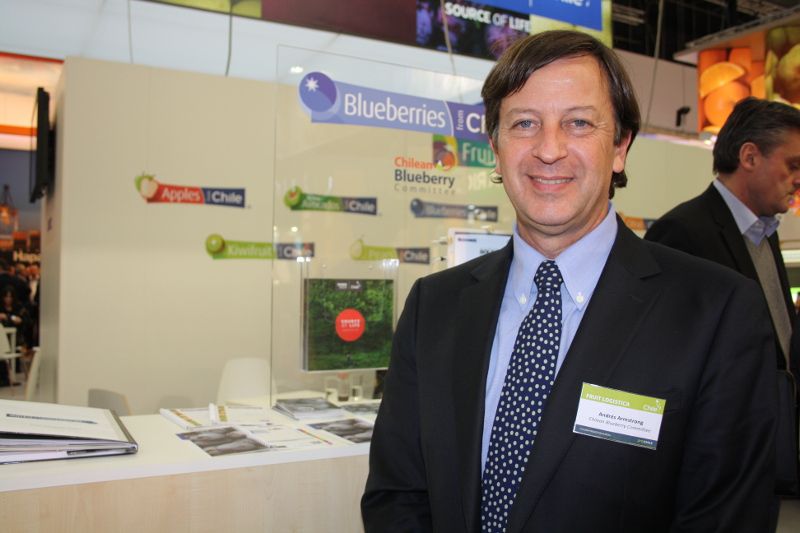 Fruit Today euromagazine had the chance to talk to one of the people who knows the world of the blueberries best, Andrés Armstrong.
Armstrong is the chairman of both the International Blueberry Organization (IBO) and the Chilean Blueberry Committee.
Worldwide, the blueberry crop has grown 10% annually between 2007 and 2014. Consumption figures also show very encouraging results, where the USA is at the head of the ranking and Continental Europe follows in its wake. Countries with an Anglo-Saxon influence such as Great Britain or Australia are important purchasers and China is beginning to take on significance in this area.
What role does the Organisation you preside over play in the global sector of this fruit?
Our objective is to exchange information amongst all the operators taking part in this sector, as well as carrying out analyses and exploring future trends in the expansion of this super fruit. In this way, a great deal of the research that is being carried out around the world can be used for our own interests. For example, at the moment the American research on health is very important and we will all be able to benefit from it.
Once a year, we hold a Summit. The last one was in Australia and the next one will be in Argentina and Uruguay, where we will provide knowledge regarding topics such as production, improvements, market forecasts, etc.
By the way, all the countries on any continent that have anything to say in the world of the blueberry belong to this Association, with the exceptions of Spain and Germany.
Why does Spain not belong, taking into account the importance that this sector is acquiring?
My impression is that we have not found the right intermediary in this country. There might be other reasons that I am unaware of, but the participation is highly interesting for anyone who has anything to do with the world of the blueberry.
What can you point out about the Chilean blueberry sector?
Chile is the second producer in the world of blueberries, after the United States, and the leading exporter on a global scale. This type of industry was born and developed in my country, with its sights being placed on exports. And this is what has happened. In Chile we have a Mediterranean climate that is very good for this crop and soils full of nutrient properties. Our harvest starts at the end of October and ends in April, in line with the counterseason of the important consumer countries from the Northern hemisphere.
Chile has played a very important role in the counterseason, as the Americans themselves, the largest consumers in the world, have profited from our production, since it has allowed them to consume this fruit all year long. For this synergy it is very important to establish a constant consumption 12 months of the year, strengthening the positioning of the blueberry on the supermarket shelves.
The same is happening in China, a country which, like the USA, is an important producer and a market where Chile has managed to enter due to its plant protection advantages. Our exports to the Asian giant mean that we can maintain the consumption habit during the period when the country does not produce its own fruit.
Accordingly, Chile, as a producer has played a very important role in the worldwide blueberry industry, not only consisting of the supply, but also in the significant investment in marketing and promotion that we have carried out in many countries.
At present, our industry is making a great effort in everything related to technology and development of quality, since this is always the best marketing tool.
What volume of plantations do you have in Chile?
Chile has around 16,000 hectares and, although they have not increased much in recent years, we have made an important variety renewal, aimed at maintaining a quality industry fixed on a product that lasts well after harvesting for the export market.
I believe that the frozen industry has become very important.
Yes, it has become an important element. For a time, this industry fed off the sub-products, but we have seen that there is a market for this sector alone and it may mean a good alternative for the producers. The lower growth rate of the fresh produce is precisely due to the fact that a larger volume has been sent off to industry, giving priority to the quality of the fresh produce.
Is the significant development of Peru competing with the Chilean industry?
Without any doubt. We are already seeing production from Peru during our season, although there must be a tendency to look for a window that is prior to the start of the Chilean campaign.
What market share does Europe mean for Chilean fruit?
Around 23% of our exports go to Europe, a continent where we have always steadily increased and where we have carried out important marketing campaigns. 50% of our shipping to Europe goes to England and the other 50% go to Rotterdam, as a base for re-exporting.
What type of promotion are you carrying out at present?
We have adapted to the new trends and we are making great use of the social networks and we have bloggers with significant media influence as prescriptors for our produce. In the USA, there is a “foodie” trend in vogue and we are campaigning with many recipes that use blueberries.