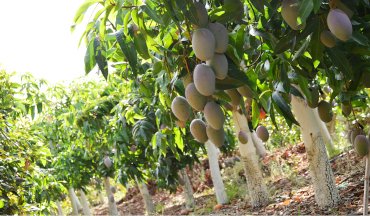 For the second year running, TROPS is launching a campaign to nationally promote mangos from Malaga, and it is extending it to specialists.

The mango season has started. From the beginning of September to mid-November, the mango harvest will take place at TROPS, the Producers’ Organisation with the largest mango market share in Spain, covering approximately 55% of mangos grown on the mainland, and 40% of avocados. In 2019, they marketed over 14,000 tonnes of national mangos and 26,000 of avocados all over Europe, with an invoicing that exceeded 95 million euros.

Its promotional campaign, ‘El Mango más Mango’ (The Mangoest Mango), is back on the main television channels – Mediaset España and Atresmedia, in prime time, with sponsoring and spaces on programmes such as Sálvame, El programa de Ana Rosa and La Ruleta de la Suerte. It will also be present on online TV platforms, radio and in the press to advertise the fact that mangos are grown in Malaga and, as opposed to those growing in other places, the fruit is left to ripen on the trees and is harvested at its perfect point of ripeness, therefore retaining its characteristic flavour and aroma and with a perfect texture for eating.

Additionally, as a new development, in 2020 the TROPS Greengrocers’ Club is being started up, a space devoted to all the greengrocers who give their all to bring the best produce from the fields to their customers. In this club, professionals will find relevant information for their everyday work and they will be able to obtain promotional and decorative material for their stores.

To join, just a few simple steps need to be followed on the web site www.clubtrops.com and a complete decorative KIT will be sent for the store.

The ‘El Mango más Mango’ campaign was launched in September, 2019 and since then it has obtained great results and wide recognition. Proof of this is the Prize for Communication and the Rural World, which was granted by the Agricultural Department of the Andalusian Regional Government last December and the gold medal at the IV WINA Festival, the most important international independent advertising event in the world, held in Los Angeles in June.

Over four decades of history

The ‘Sociedad Agraria de Transformación TROPS’ was created in Vélez-Málaga on the 8th of October, 1979, when five farmers from the Axarquia region joined forces to offer produce directly to the national and international markets. In the beginning the main crops were strawberries, but over the years avocados and mangos gained market share until becoming their main crops.

Almost 41 years later, there are over 2,500 associated farmers, from Portugal to Alicante, with Axarquia and the Costa Tropical de Granada as the main activity and production areas.

It is the first Andalusian Transnational PO specialised in the production and marketing of sub-tropical fruit in Europe, to which it has recently added the US market.