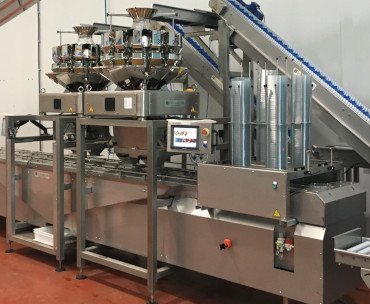 The Shock Absorber system by Induser guarantees the best treatment for blueberries
Blueberries are small fruits that require special treatment when packaging in order to ensure they do not suffer from friction with the rest of the fruit and above all, that they are not bumped when moving from one stage to another in the machinery. This extra-delicate treatment is possible thanks to the Shock Absorber system developed in the Induser packaging machines and that has already been tested by dozens of blueberry-producing customers.

Thanks to the work carried out in its R&D+I department, another of the important technological advances that differentiate Induser in its sector is associative weighing. This system guarantees the exact weight of the tub using software that correlates the data obtained from the combined weighing between different scales. The multi-format packaging machine is also worth mentioning, which allows immediate changes in packaging to be made, making the work easier and shortening the waiting times.

After many years of research with the berry varieties that producers in the Huelva area and Northern Spain work with, this system has allowed Induser to both respect the layer of wax that covers the produce (by transporting it in a single layer) and to apply an extra-delicate treatment to the fruit, managing to keep it in perfect conditions at the moment of packaging. To do this, a study was carried out on the impact on the fruit during the weighing and packaging process and the methods to minimise this, applying variables such as the route of the blueberry when dropped, the speed and height of the fall, the slant of the slope and, the most important point, the Teflon covering material, which allows the 100% cushioning and absorbing of the impact.

Using all these methods, Induser has shown in practice that the system used by its equipment keeps not only the firmness of the blueberries intact during the packaging phase, but it also lengthens the shelf life of the fruit, maintaining greater consistency over time.