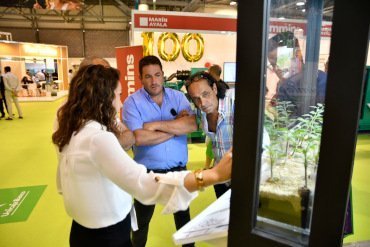 During the event, the awareness existing in the sector regarding the importance of knowledge as a basis for innovation was obvious, a keystone on which is founded the dynamism and capacity for the adaptation of the companies making up the sector of intensive production and the auxiliary industry.

The desire to know about the sector’s trends and the latest technological innovations for their application in the field now and also in the near future have brought together an important flow of trade visitors from different points of Spain where intensive farming is a priority, such as the Granada and Malaga coasts, and from different European, American, Asian and African countries.

On this aspect, the renowned Spanish economist José María O’Kean indicated in his speech given in the block of conferences on the present and future prospects of the sector that “to gain in competitiveness, the sector must produce with lower costs and be more productive, which is achieved through the creation of added value in the products that satisfy consumer feelings and therefore, meaning that they are ready to pay more for them.” In this way, O’Kean invited the businessmen attending the talk to “develop value creation centres to train the workers through association of companies”. This is due to the fact that, in his opinion, the workers in the agrifood sector in the near future will need a great deal of information, which will be defined from the analysis of the data offered by technologies such as Big Data and Blockchain.

Likewise, many companies carried out commercial presentations, registering significant attention by the trade visitors regarding the knowledge and products that stem from the activity of these companies, as well as the 300 business meetings between exhibiting companies and international companies or trade visitors

Infoagro Exhibition, once again, has become not only the business centre for farming producers, but also the materialisation of the innovation and the future prospects based on scientific-technical knowledge and technology that are present in the sector.