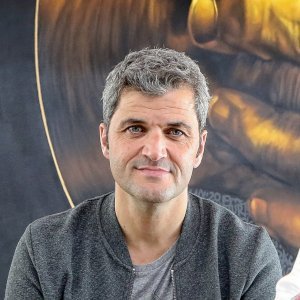 Félix García (Barcelona, 1974) is a man with slightly unusual ideas. He studied Economics, but he taught himself to be a biotechnologist, by reading and rereading over a seven year period. He is an indefatigable worker aiming at “making things happen.”

His life has been a succession of original projects and disruptive scenes. He decided to sequence his family’s DNA to find out if they have any genes prone to certain diseases and to use a good diet to fight against this propensity.

He is so practical that, in order to not waste any time, he bought all the remaining stock of his favourite trainers (22 pairs) from a famous footwear company.

He receives us in the company’s canteen. He is approachable, witty and a joker from the first moment of sitting down to breakfast. Not even the heavy cold he is suffering from can smother with his ingenuity, and the swear words he launches don’t even seem out of place.

The installations of MAAVi, the largest biotechnology centre in Europe, look more like the New York MOMA than a company with cutting edge laboratories. It is a place with a soul, where the Nature of Almeria (sea and light) dialogues with design and art and where Felix can give a free rein to his creativity. The centre’s mascot (Marcelino Javier) is the work of the Catalan artists Ornamante and it is present in all the common areas.

Four colourful graffiti preside over one of the gardens and in the ambivalent room an enormous mural with interlocked hands stands out.

Is being a businessman vocational?

No, not at all. My only vocation was to be a football referee and the kart racing that I loved in my youth. I refereed for 14 years, but I stopped when I was about to move up a category to second division B, due to lack of time.

I didn’t find my true passion until I was almost 30, but I went through many phases before that. I liked chemistry a great deal, but I studied Economics because I thought I would earn a better living. The degree in itself didn’t motivate me and during that time I wanted to be a tax inspector and later on, an air traffic controller.

What incredible ups and downs to finally become a businessman with a biotechnology company, which has had over 30 takeover attempts. You could have studied something that was more closely linked to this discipline.

I was very aware of the humble beginnings of my family, where it was difficult to make ends meet and at that time the most important point for me was to earn money.

The idea of being an air traffic controller was because I discovered that, intellectually, I had the part related to logic and space highly developed; I was always very good at maths, chemistry, physics… so I thought that my skills would help me in this profession, but I didn’t speak any English.

I think that I started to become slightly more focused when I did my master. I was the top of my class and I was offered three jobs: a multinational in Madrid, a cooperative and a bankrupted company in Almeria. And I chose the one with the greatest challenge, the one in Almeria, which subsequently led me to create Kimitec Group.

At first glance, it wouldn’t seem the best choice

Indeed. It consisted of refloating a group of companies that were bankrupt. When I arrived, the owner said: “At last we have an economist,” and at my first meeting with the bank manager I didn’t even know what a promissory note was because we weren’t taught about them on my course.

And as a result of that, in 2007, you found your path and created Kimitec Group

Kimitec started its journey in the year of a global crisis. It was very tough because we had to ask for money in advance from the clients who placed their trust in us and then I had to mortgage my parents and my parents-in-law’s houses to continue with the activity.

Amazing. And your wife had nothing to say about this?

She knows what I’m like and ever since I met her at university, she has always been by my side and, in fact, although she is a teacher, she works with us. She had other career opportunities, but she is fascinated by cooking and she is the one that gives us home-cooked meals in the company. Our canteen is ‘Mari’s Place’. I am proud of the fact my wife is the cook.

How can you understand a discipline as scientific as biotechnology without being trained in it?

I taught myself. My room was a nest of notes and books thrown all over the floor for over seven years. I couldn’t tell a fungus from a bacterium, until one day I told a professor from the University of Seville that we had to start from scratch. Since then, I have read everything that I could get my hands on.

You can’t have done badly because yours is the only European company that has been granted four Horizon 2020 projects with very hefty funding, and you are present in 90 countries.

Yes, that is true. This shows that Europe wants to change its way of producing food towards more natural, sustainable methods, on which the social charges due to disease are reduced. Food without synthetic chemicals is a basic requirement for people and for the planet.

I have heard that you are going to sequence your DNA and that of all your family right here. Aren’t you afraid of what you might find with the results?

No, quite the opposite, it gives me confidence. Everything we find out will be used to fight disease better and to be able to do so using a diet that is as natural as possible, from the very beginning of the production processes.

Is the name of MAAVi an acronym of something?

Yes, it is the acronym of ‘Making a Vision’ in English.

MAAVi also corresponds to the name of our foundation, which is aimed at socially integrating children from the over 100 nationalities that live here in Roquetas de Mar, through football. We want to build an inclusive society from the bottom upwards. Al the money raised in the canteen goes to the foundation and shortly we will start with educational support classes and we will also pass this on to the parents of these children. It is an NGO that is backed by the Spanish Football Federation.

Additionally, we have set up a small community of cyclists (Puto Peñón) that has already had its first race and with which we raise funds to help these families. We are the ‘putoters’.

Prev“Spain is the leader and it should act as such”
Anión F1, greater resistance in late cycleNext
YOU COULD ALSO BE INTERESTED IN