Greater flavour and resistances in the Cyro Line 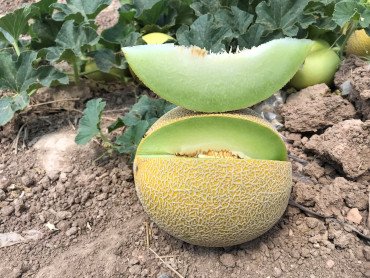 Seminis is extending its Galia range with two new references, Albizu and Galvir.

Flavour that is reminiscent of traditional melons, with the advantages of a long shelf life. This is the concept on which the Galia line by Seminis Cyro Line is based. A very well known range that continues to grow. The latest to join the ‘family’ are Albizu and Galvir.

The first one, Albizu, is aimed at greenhouse plantations in Almeria and for early open-air crops in Murcia. José Guirado, head of Melon Development in Iberia at Bayer, emphasises its resistance package (strain 3.5 of powdery mildew, aphids and CYSDV) along with earliness, in addition to its characteristic traditional flavour.

The second new development, Galvir, continues along the same line, increasing the resistance package: (strain 3.5 of powdery mildew, aphids and multi-virus – CYSDV; WMV, watermelon mosaic virus; ZYMV zucchini yellow mosaic virus). In this case, it is recommended for late plantations in Murcia and crops in Castilla-La Mancha, resolving the virus problems (WMV) that the region has suffered from in recent campaigns.

During the next Melon & Watermelon Week, which will be held from the 29th of June to the 3rd of July, Seminis will display its new developments and will continue to promote other types such as the Piel de Sapo introduced during the last campaign: Portus, Roncero and SVMP3228, varieties that are categorised in the New Piel from Seminis, its new flavourful generation of Piel de Sapo that are lifting the brand up to be a reference in this segment.

Without forgetting varieties such as the yellow melon Chester, the market leader in Almeria and in the early segment in Murcia, which stands out due to its great flavour; and Sugarlup, a Cantaloupe with excellent flavour and internal quality that has been very well-received in supermarkets since its launch.

This year, owing to the exceptional COVID-19 situation, Seminis is modifying the format of its Melon & Watermelon Week, focussing the on-site activities towards the local market, but without leaving out international clients, using online resources and tools that will bring its portfolio to all the corners of the world. There will also be talks with supermarkets, given via videoconferences. An event that will be marked in red on the calendar of the main agents on the chain of value.