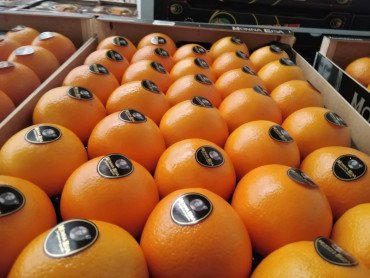 In spite of its deep-rooted international vocation, Hispalco has not stopped growing and it is returning to the home market in its premium segment.

José Beltrán, manager of the company talks to Fruit Today about the current citrus fruit campaign and the other produce they work with.

This campaign is being particularly difficult for citrus fruit because the sizes are, in general, small. How is the season developing for a company that is devoted to the premium segment?

Well, with great difficulty. The smaller-sized fruit has limited sales in some destinations, although not in all of them. Up to now, the most damage has occurred in Navelinas, as there were no calibres 1 and 2, and only a very few 3. However, when our clients have realised that the lack of size was generalised, they reacted and have started asking for calibres 4 and 5. Although, with a smaller volume than in previous campaigns.

Have you added any new markets? What was the deciding factor for returning to the national market?

Over the past two years, we have made an incredible effort to grow, slowly but surely. The Hispalco 360 department is the best proof of this. It has allowed imports from third countries to be increased and this, in turn, has encouraged the distribution of our brands on the national market. If there is one point that characterises Hispalco, it is ‘the impossible’, that is to say, creating new ideas to make things possible. In spite of being an international company, the national market was something we knew very well from our origins, and this knowledge has allowed us to come back to it at the right moment, without this being a pipe dream, with the correct presence and confidently.

Of the five brands that you own, which one is showing the best results?

We have Monna Lisa®, Lady Godiva®, Unicorn® and Hippie Chic®, in conventional produce and Hispalco_bio® for ecological crops. The results of each brand depend on their age. Monna Lisa® is, by far, the best known and appreciated brand. It has been on the market for almost 30 years and it is a real ‘object of desire’ for many people. However, against many strategic forecasts that were made to us at the time, the other brands are working well, very well in fact, and we can say that they are consolidated. The direct, constant contact that we have with the markets is making us increase our volume in the Unicorn® brand, at the expense of Lady Godiva®. It is very complicated keeping up a premium quality standard in three brands at the same time. Hippie Chic®, on the other hand, is a brand to which our clients remain loyal. The quality-price ratio is unbeatable. And as we really cannot stop inventing, we are studying the launch of a new brand about which we cannot yet give any details, but we are certain that it will be warmly received.

What volume of citrus fruits, strawberries and persimmons did you market in the last campaign? Forecasts for this campaign.

Hispalco is not a company ruled by volume; quality is more important. And large amounts are usually incompatible with extra quality and gourmet produce. The land has the ‘bad habit’ of doing what it wants. There is also the demographic distribution, which indicates that gourmet produce is not for everyone, nor can it be on all the markets. The Hispalco 360 department is a direct result of this: distributing CAT. I produce in Hippie Chic®, and to a lesser extent, from the producer, at more reasonable prices. But as the subjectivity of our times lies in figures: this year we are producing around 12,000 tonnes, including citrus fruits, strawberries and persimmons, compared to the 10,000 tonnes in 2019.

In recent years, the company has opened up to new products; will it continue along these lines?

Always. It is, along with quality, Hispalco’s other flagship: inventing, creating, developing… Right now, we are concentrating on importing the produce that we have confirmed will be well received, prepared in the Monna Lisa® and Unicorn® brands, regardless of their country of origin. This is not an easy task, but every day we are increasing our catalogue of products and preparations that are being warmly accepted by our traditional clients, on the national market and also, in emerging countries.