Kanzi® is increasing its promotion initiatives 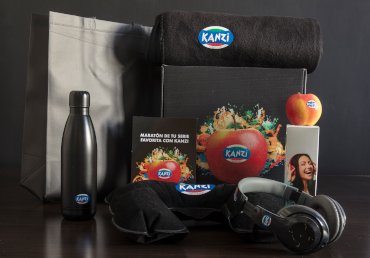 Many new promotional initiatives, devoted to the special explosion of energy, characteristic of Kanzi® have taken place since January.

Five months into the sales campaign and on the eve of the launch of a series of important promotional initiatives for Kanzi® apples, marketed in Spain by the Italian consortium VOG, alongside the cooperatives from the Netherlands, Fruit Masters, the time for the first evaluation has arrived.

“We have almost reached the halfway point in the sales campaign and we are highly satisfied with the yield of this first part of the season,” Klaus Hölzl, Sales Manager for the VOG Consortium, affirms.

“This year we have had a greater volume compared to the previous season and the stock reduction plan is moving forward quickly. We are respecting the sales plan set forth for Spain,” comments Fabien Dumont, Production and Sales Manager at Fruit Masters.

An Out Of Home campaign has been working on wholesale markets such as the ones in Barcelona, Madrid, Bilbao, Murcia and Seville, since January, aimed at the B2B public in order to emphasise the strong presence and success of Kanzi® on the Spanish market.

The “Kanzi® Marathon Pack” was created to offer a group of influencers the perfect energy explosion. A special kit (a bottle of water, a neck cushion, WiFi headphones, a blanket and a box of apples) will be used to publish posts and stories on Instagram, emphasising the “energising” role of Kanzi® during “marathons” in front of the television.

Kanzi® will also promote a gift related to the world of videogames with the collaboration of the YouTuber and influencer, Perxitaa. Contestants will have to like Kanzi® and tag a friend with whom they would like to play on the PS5, while eating Kanzi® apples.

PrevEurope, the tasty morsel: a record in citrus fruit imports
Ambrosia™, stronger and more attractive than everNext
YOU COULD ALSO BE INTERESTED IN