Europe, the tasty morsel: a record in citrus fruit imports 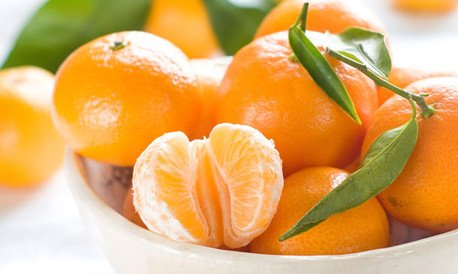 Almost 2,200,000 tonnes of citrus fruits from third countries entered Europe, a figure that means a 15.4% increase compared to the previous campaign.

This volume refers to the months between January and October; therefore, the figure could still rise slightly.

The Old Continent is acting as a magnet, particularly for imports from South Africa, which is becoming consolidated as the first exporter country to the EU thanks to the agreement signed in 2016, which takes up 44% of the total imports. The 968,640 tonnes sent during 2020 show an increase of 24% if compared with the previous campaign. This increase occurred mainly in late mandarins, which have tripled their surface area in the African country in just 10 years. These late varieties are the ones that are on the European supermarket shelves when the early Spanish campaign starts.

In second place in the import ranking, Egypt stands out, with 334,354 tonnes shipped, a 16% increase compared to 2019. Turkey, which has been in the news in January due to the detection of 57 plant protection materials banned in the EU, beat all its records and grew by 49.5% in 2020, with a total of 190,294 tonnes. On the other side of the coin is Morocco, owing to a drop in production, and Argentina, due to the 133 shipments stopped for pests and disease quarantines on its imports.

These figures from AVA-ASAJA, “mean that the community authorities must reconsider their diplomacy to recovery interesting markets for citrus fruits such as the United States, although at present the new Biden Administration is dragging its feet, continuing to maintain the 25% customs duties on Spanish citrus fruit, or with Russia, which after the European rejection regarding the Crimean invasion, has maintained its veto on western fruit and vegetables since 2014, and once again threatens to finally break off relations with the EU due to its support for the dissident, Navalni.

Another of the questions that the Spanish citrus fruit sector always has on the table is the inequality regarding cold treatment of South African citrus fruits, which has to have it for its exports to the USA, but not for Europe. All of this, without mentioning the pests that the African country has introduced into Europe.

The South African challenge to the world

South Africa is the second fresh citrus fruit producer in the world, after Spain. The powerful South African industry, well organised and very clearly focused on its professionalisation, has become a challenge for the citrus growers’ status quo that has existed throughout the 20th century.

To manage this productive challenge, the sector is taking its limitations in the country’s logistics infrastructures into account along with, of course, variety research.

The projections made by the CGA (Citrus Growers Association) estimate that citrus exports from the southern country will reach 200 million boxes. This volume will be more focussed on the late mandarin varieties, as well as on the new lemon plantations that will start up over the next 3 to 5 years. These estimates are based on the sales provided by the nurserymen, which reached their peak in 2017. Regarding the soft fruits, as may be seen in the graph, they have grown steadily, although showing a slight drop since 2019.

These forecasts are obviously subjected to the sector’s current decision-making process, particularly referring to the replacement of the oldest trees.

In the soft fruits category, over the next decade 21 million boxes are expected to be reached. Late-ripening mandarins will be the main fruit responsible for the growth in this segment, which will go from 18.7 million boxes per year to 37.1 in 2030. 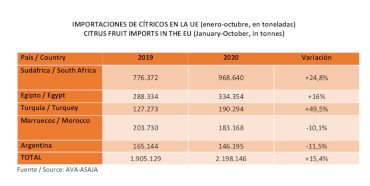 Regarding Valencia and Navel oranges, their growth rate is constant. In Valencia, the 55 million boxes in 2020 could become 70 million in 2030 and in Navel, although with a slower take off, they will reach 30 million boxes. The total for both oranges will come to the not inconsiderable figure of 100 million boxes that will come onto the markets, mainly in Europe, although the CGA has also put its sights on the Asian markets.

After several seasons of downturn, the current grapefruit production is tending to stabilise. Due to its cropland area, it is a fruit that is particularly exposed to droughts and other inclement weather conditions.

With the new lemon plantations, South Africa intends reaching 40 million boxes in 2030, with a slight drop from that date onwards due to the maturity of the oldest trees.

Nevertheless, in spite of the difficult circumstances due to the pandemic, the South African employers aim to “increase their trade space in the world using the premise of profitability for all the agents on the chain.”

PrevPCRs, working against vegetable piracy
Kanzi® is increasing its promotion initiativesNext
YOU COULD ALSO BE INTERESTED IN