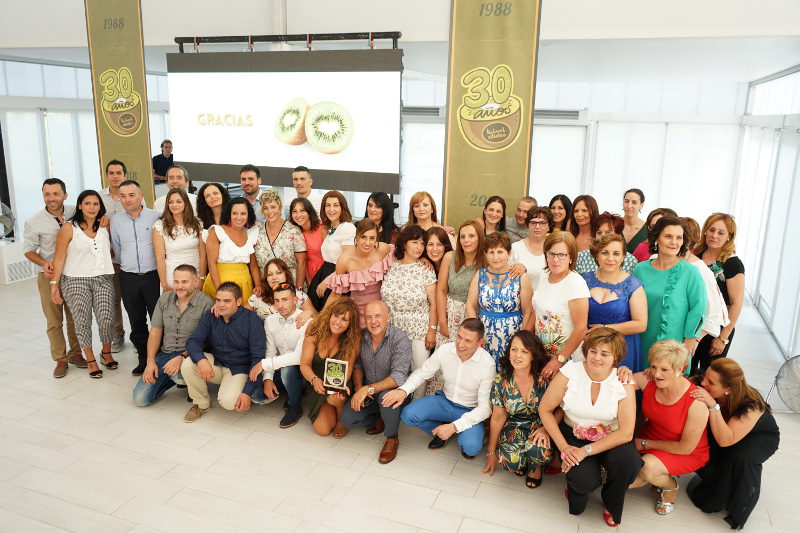 At Fruit Attraction, the company will celebrate its 30 years in the business

Since its establishment in 1988, Kiwi Atlántico has continued to grow, based on effort and respect for the sources. These have been the tenets that have led the project to becoming a national leader in the sector, and this would not be possible without all the people who, from the very start, have worked in the company. Therefore, last July, during a very emotional day, the brand paid tribute to some of the key people in the history of Kiwi Atlántico: those who owned the idea, the executives, the workers, and the suppliers.

José Carlos Vila, the managing director, points out that “we are taking advantage of this anniversary to make public what we have always felt: enormous gratitude for the work of all the company’s staff and for the effort and bravery of those who have promoted it.” “At Fruit Attraction, we will celebrate our first 30 years in the same way that we will celebrate the 10 years of this trade fair, which we have always believed in and supported,” he comments. Accordingly, Vila points out that “at Kiwi Atlántico we believe in agricultural progress and, therefore, we have been committed to this meeting in the sector since its first edition, back in 2008.”

Kiwi Atlántico was established as a union of 30 kiwi growers in Galicia and Asturias. It now has over 70 members and 20 cooperating producers, grouping together farms of different sizes.

It is a company formed exclusively by producers, with a deep-rooted history in farming and, as a result, a company that loves productions made for personal consumption, endorsed by Northern Spain’s long tradition that is based on family-run complementary agrarian economies.

PrevThe Citrocide® System was presented in Germany at the industry for fresh-cut convenience food
The Zespri® system: quality as its hallmarkNext
YOU COULD ALSO BE INTERESTED IN