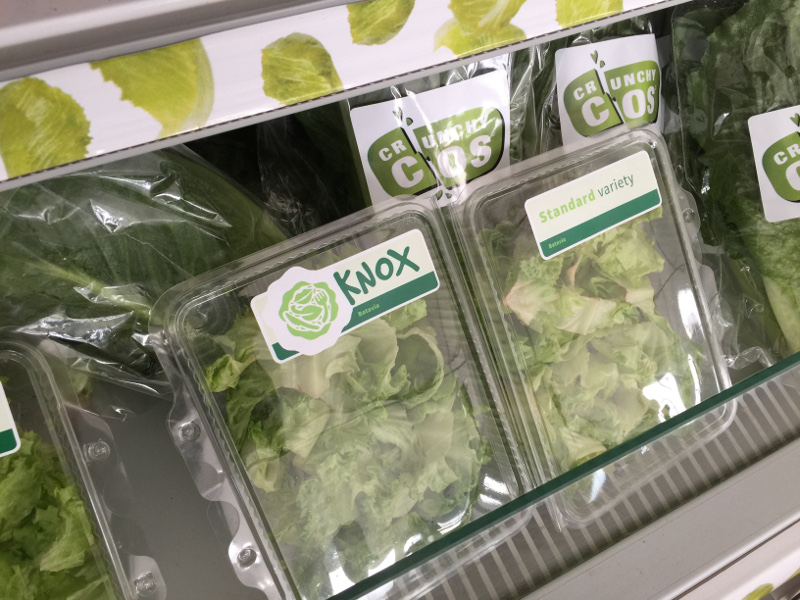 The property developed by Rijk Zwaan lengthens the life of lettuces and allows pre-processing in the fields.

Last year in February, the seed company, Rijk Zwaan held its Winter Open Field Days, where hundreds of professionals from the sector arrived from all over the world to witness first hand the company’s latest developments in winter open air crops. At this event, the indisputable star was Knox, as was to be expected after winning the Fruit Logistica Innovation Award.

The international Lettuce Crop Coordinator, José Luis Saiz, has reviewed with Fruit Today the long journey until they obtained what they wanted. A journey that started in the 1990s and throughout which they have tested thousands of lettuces until finding one that had the property they needed. Subsequently, they identified the gene that delays oxidation and using traditional improvement techniques, they have been introducing it into over a dozen types of lettuce to which they continue adding new varieties that allow different cycles to be covered in different regions of the world. “We are convinced that Knox™ is going to give the fresh cut industry a boost,” guarantees Saiz. And the fact is that it not only does it lengthen the shelf life, but it also maintains the maximum quality for longer: it allows the controlled atmosphere (cause of this characteristic anaerobic smell that issued from fresh cut salads and that caused rejection amongst consumers) to be reduced and even eliminated. With Knox™ the door is also opened to many lettuce mixtures: and operationally, it makes pre-processing in the fields possible. This last element is an advantage that is already been taken advantage of by international companies from the processing industry, some of which have started to perform these tasks in Spain (to date the produce was sent to the destination fresh and without handling). “As there is more time before the produce oxidises, the stems may be removed and a first cutting of the parts that will not be used made, saving labour expenses in the fields (which are more expensive in the factories), and in transport. Likewise, this waste can be recycled as green compost on the fields, instead of having to eliminate it later on, which would involve an extra expense.”

Currently Rijk Zwaan is incorporating the Knox™ property to new varieties of iceberg to complete the entire cycle, to romaine lettuces (traditionally the one with the most problems due to its rapid oxidisation), and to the entire Salanova range.

At the same time, the company is working on the Crunchy Cos line, crunchy, tasty lettuces with a notable degree of sugar, a characteristic that gives added value to this segment. “We have two main ranges: a new romaine type lettuce with flavour as is star and another, snack type that can be used as a support for appetisers, Snack Crunchy Cos.” Saiz emphasises the work that is being developed in the lettuce segment, focused on the sandwich market for Food Service and the healthy trend.

Salatrio closes its chapter on innovations, combinations of three types of lettuce with which a greater variety of flavours, textures and colours are offered in a single piece.

PrevClemcott, quality is important.
Agroponiente starts off the campaignNext
YOU COULD ALSO BE INTERESTED IN