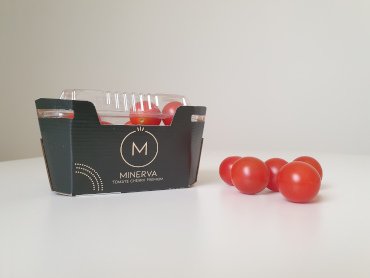 The company expands its range with the cherry tomato Minerva, adds California and Sweet Palermo peppers, and boosts its potential with new associates

The cherry tomato Sarita is the ‘flagship’ of the company from Águilas, Looije. Its high quality has garnered it an increasingly important position in the sector. A rising evolution that has been maintained even during the pandemic. Now, the company is extending its range with a new premium cherry tomato called Minerva. Pedro M. Lozano, Marketing Manager of P.O. Looije, explains that “it is our first experience of creating a brand from scratch for sale exclusively to a single client.” It will be marketed by the El Corte Inglés.

In addition to its flavour, Minerva’s colour and its small size make it stand out. For staging on the supermarket shelves, a more sustainable packaging has been chosen, with plastic only being used on the lid, advocating the eco-friendly concept that consumers have been demanding in recent years.

Like Sarita, Minerva is also synonymous with guaranteed quality. They are tomatoes that “always meet expectations,” Lozano underscores.

Furthermore, the Producer Organisation (P.O.) Looije continues to grow. Firstly, with the purchase by Jos Looije of the company from Almeria Luis Andújar, which has changed its name to BioLooije, an important operation that has meant 400 people joining the team, as well as the addition of 38 hectares of surface area, for both conventional and ecological crops.

With BioLooije, the range of products is being extended, adding California peppers (red and green) and Sweet Palermo peppers to its range, in addition to the vine cherry tomato, which make up the bulk of BioLooije’s crops.

On the other hand, two new producers from Granada have recently joined the P.O., extending the regions where the company is present (Murcia and Almeria), making a total of over 100 hectares and 900 people.

In 2019 Looije reached 6.4 million kilos, one million more than in the previous campaign. The company exports its produce to 14 countries, amongst which are Sweden, Portugal and the Arab Emirates, the latest to join its market share.