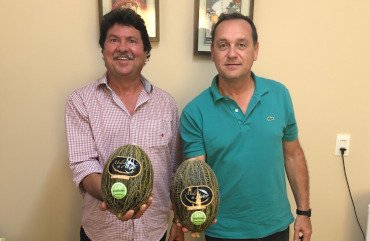 For the prestigious brand, the ultimate goal involves the conversion of all its conventional production to Zero Residue over the next year.

When was the ‘Zero Residue Melón de Autor’ born? Has it only been launched with counter-season melons?

The project in itself was born almost a year ago as a result of our interest, and obviously, the social interest existing in a healthier product. The first commercial consignments have been on the market for several months and they can already be acquired in some Spanish supermarkets.

The Zero Residue melons that we are marketing at present belong to the productions that we have in Brazil. However, it wasn’t born there, but here in Spain, where we have been working on this project for quite some time. Little by little our conventional produce is developing into Zero Residue melons. The ultimate goal is for all the production to be grown using these parameters.

Is there enough demand for this type of melon?

The demand is out there and consumers prefer this type of produce, but whether they are prepared to pay for it is quite another question. And the truth is that it is difficult to acquire it. Therefore, as a differentiating brand value, we are ready to assume this extra cost to market all our conventional production as Zero Residue.

This melon is being grown in Brazil. Will it have continuity with the Spanish production campaign?

Of course, the Spanish melon campaign, with its different producing regions is very important as it allows us to have a 12 month continuity on the supermarket shelves.

Which markets is this melon preferentially aimed at?

Historically, the important Piel de Sapo consumers have been Spain, Portugal and Southern France, but there is already demand in other European countries (Germany, England, etc.) and even outside Europe, in places such as the Arab Emirates.

Another of the company’s most important successes was Le Petit Autor. What were the reasons behind this launch?

We had seen some of the disadvantages consumers had with large melons. Therefore, we thought that, while preserving the quality of the product, a smaller melon meant greater convenience when shopping, and in storage and even savings, as the piece weighed less. And of course, at no point does it have to be cut in half. And all these advantages have become a reality with Petit Autor. Today, it has a very high sales potential. We have a melon with a size between 1.3 kilos and 1.9 kilos, with excellent quality that has good acceptance, not only on the home market, but also internationally.

In just a few years, you have managed to position a brand though unique, very well placed advertising actions. Do you think this strategy has contributed to the success?

Obviously. Although the product quality is always the most important point, knowing how to transmit it on the right channels is essential and we have no prejudices and we like to break moulds; for this reason we will continue, when it’s possible, with the Davis Cup, the tennis tournaments and football in Asia, as well as commercials on regional television stations. We are convinced that we must transmit what we are doing.