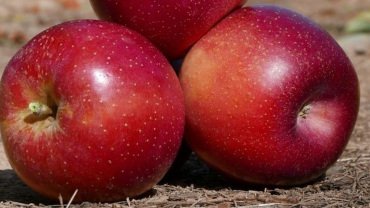 In 2021, the first apple adapted to the constant rise in temperatures and lack of water will be planted in Catalonia.

Registered with the variety name HOT84A1, the new apple represents the first output of the international genetic improvement programme for apples and pears, Hot Climate Programme, which is attempting to respond to the challenges the producing sector must face regarding planetary global warming  and which affect the Mediterranean region in particular.

The new variety has been evaluated on the fields of the IRTA’s (Institute of Agrifood Research and Technology) Experimental Station in Lleida, as well as the Mas Badia Experimental Station, in Girona, where the summer temperatures can rise above 40°C.

The HOT84A1 is red, crunchy and juicy and the first trees will be planted in 2021. The marketing is planned for the rest of mainland Spain over a period of three years. Fruit Futur, the association of Catalan producers has just signed the first licence for marketing the new variety.

“The new apple varieties, created using traditional methods, are aimed at adapting to increasingly hot summers,” Joan Bonany, a specialist from the fruit growing programme at IRTA explains. Additionally, “they provide new opportunities for producers from regions where it is becoming more and more difficult to cultivate crops, and they have the advantage of being close to consumers.”

The Hot Climate Programme is formed by the IRTA, Fruit Futur (composed of Actel, Fruits de Ponent, Nufri and Poma de Girona) and the New Zealand centre Plant & Food Research, and it is supported by the Department of Agriculture of the Generalitat of Catalonia.

As a result of the demand by the producing sector of fruit in Catalonia, in 2002 the IRTA, Fruit Futur and the New Zealand research centre Plant & Food Research started up the Hot Climate Programme, aimed at developing new apple and pear varieties adapted to high temperatures. At that time, the Catalan fruit producers observed that, owing to the weather conditions, the apple and pear varieties that they had been growing up until that time had greater difficulty reaching an optimum quality in the Catalan growing conditions. Eighteen years later, the results of this research and innovation initiative are starting to bear fruit.

In February, 2019, an agreement was reached with the New Zealand company T&G Global, which joined this programme as a strategic partner for the worldwide marketing of the licences for the new apple and pear varieties.

Companies such as Waimea Nurseries (New Zealand), Top Fruit (South Africa), Dalival (France), Worldwide Fruit (UK) and Montague (Australia), are carrying out trials for the HOT84A1 apple variety, in which they are evaluating both the agronomic behaviour and the quality.