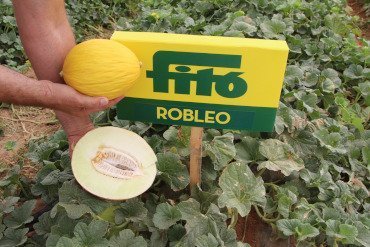 Once again, this year the seed company organised its Melon and Watermelon Seminars in Lobosillo (Murcia) to show both its commercial varieties and the ones that are going to be introduced over the next few campaigns in the fields. This year they have concentrated on emphasising the R&D team’s main goal: to complete the different melon segments with top class varieties to cover the production cycle from start to finish in the region of Murcia.

The clearest example is the piel de sapo segment. In early cycle, there is Paredes, for sowing during March. This is a high production melon that has a strong, healthy plant, with fruits of the size demanded by the distribution, attractive grooving and firm, juicy flesh.

For medium sowing, throughout the month of April, Fitó has introduced Ceferino this campaign, which incorporates a complete package of resistances against powdery mildew and aphids. It stands out due to its high production and its great flavour. Ceferino has a strong, balanced plant, which sets easily and produces oval-shaped fruits, with lengthwise grooving, very well marked bedding and excellent flavour with high Brix degrees. For medium cycle sowing, the company has Kanela, which gives size and very good flavour.

Another new development is Arroyo, indicated for late sowing, with a traditional flavour and a complete package of resistances against powdery mildew and aphids. Arroyo presents a medium high strong plant, which sets easily in groups and medium-sized fruit perfect for boxing, with an attractive lengthwise grooving, sweet flesh with excellent flavour, as well as a good post harvest.

At the Seminars, the harvest calendar for all these varieties was emphasised: Paredes would start in Murcia throughout the entire month of June and the first week of July, followed by Kanela, from the last days of June to the 25th of July. After this, Ceferino would be available for the entire month of July; while Arroyo would continue approximately until the 10th of August. From this point on, the season would start in Castilla-La Mancha with the Manchego variety as the indisputable leader in the segment.

Mercabarna will gain 22 hectares within its compound

An opportunity to recover the Spanish home market

PSB is presenting a new range of flat nectarines

The strawberry campaign is closing with an almost 8% increase

Seminis, going for the 2.0 version of the CGMMV