Mulder, back to normal 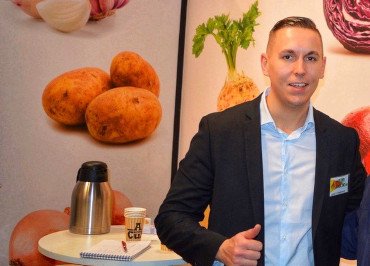 The Dutch company, with an intense worldwide activity, is getting back to ‘normal’, seeking out new business opportunities all over the world.

How have your sales evolved during this very complicated year due to the pandemic? (closure of restaurants, closure of borders, increase of shipping costs).

The first half of the campaign was very good, with very high export levels, particularly around the Christmas period. From the beginning of 2021 up to now, our sales have been stable. Last year, during this same period, there were many purchases that responded more to reasons of panic and uncertainty than to real demand. This year, the situation is slightly calmer on a commercial scale. Furthermore, our regular purchasers are remaining loyal with regular purchases. Onions are a consumer staple in many countries and there is always a demand for them.

What is the global situation of the onion market?

As I have already mentioned, the situation has tended to calm down because the pandemic looks to be under control. In the Netherlands, as in Spain, we are starting with the new harvest, although ours is slightly later than the Spanish production.

What does the Spanish production mean for Mulder?

Spain is a significant supplier of large-sized produce that we export to the United Kingdom, where Spanish onions are highly appreciated, but the truth is that this very unusual year we have not reached the same sales volumes as in past years. We also supply Spanish produce for the German market, but with sizes that are suitable for preparing onion tubes. The different lockdowns that have been occurring in European countries, along with the uncertainty that we have experienced, have taken their toll, but we expect this to be a more positive campaign.

Do any markets stand out, in spite of the healthcare situation?

Exports to Banjul, in Gambia, have grown, although there are periods when the country closes its borders to protect its own harvest.

Regarding origins, are there any new developments? Which are your main supplier countries?

We have just finished the onion season from New Zealand, in a campaign that we could describe as satisfactory. Produce from this origin has been mainly sold in German supermarkets.

On the other hand, does Mulder have any new destinations?

Our company is always looking for new destinations, but the world is interconnected and we depend on other global suppliers to enter different markets. An example of this is what is happening with India, one of the largest world exporters. If India does not deliver to Bangladesh or Sri Lanka, Mulder onions would have business opportunities in these countries, but while India is supplying them, it won’t.

What challenges does Mulder have in this pandemic situation?

Our challenge involves continuing to grow, but in the current situation we must limit certain risks that the pandemic has put on the table in a globalised world. That is to say, we must take the risk situation into account in certain destinations.

PrevSweet Magnolia, the latest from Seminis
Sweet onions are gaining groundNext
YOU COULD ALSO BE INTERESTED IN