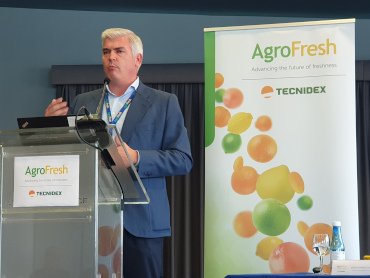 Quico Cañamas, Operations Manager from Cañamas Hermanos, and Fruit Today covered some of the hottest topics for the sector in this interview.

Competition, sustainability, re-structuring, strengths, but also some of the system’s incongruities were the topics covered in our chat.

Are we going to need smaller volumes to ensure that the campaigns work well? What do you think we learnt from the previous campaign?

Last year we reach the third record figure for exports and the most important problem we had involved the use of the fruit and its organoleptic quality, which meant that we were not the first option for the European large-scale distributors.

Some crops in Spain have had their offer restructured or are in the process of doing this (strawberries reached 10,000 h and are now at 6,000 h and there are grubbing operations for stone fruit in process). Do you think that we should be thinking about this possibility?

I think that the offer is self-regulating and, therefore, it does not have to be done artificially. Our sector is slowly but surely becoming organised, with an increasing trend towards large farms and a gradual disappearance of smallholdings. The market itself acts intelligently: the elements that are worthwhile remain and the ones that aren’t tend to disappear.

Do you feel that after many meetings, articles and debates last year, the homework has been done to ensure that the sector does not suffer again?

I think that we have made the sector aware that together it is more powerful than each company fighting their wars on their own, and as long as this union remains fruitful, we will be stronger and more compact. In the end, we must understand that the main enemy is not Spanish produce, but rather non-European produce, because it has a head start in costs, treatments and in requirements.

The pressure from the large-scale distributors continues to be very strong and more than one operator comments that the European supermarkets do not understand that this campaign is different. What is your opinion about this?

The European markets, which are perfectly regulated, prefer Spanish produce due to its service, organoleptic quality and its guarantees in terms of food safety. That said, all the markets have some reference prices and we cannot distance ourselves from this margin because we will lose the programmes.

Do you still think that Clemenules and Navelina are two varieties in crisis? The shortage of the former is self-evident and Navelina has not had the best quality and its price in the fields has been maintained.

Yes, I think there is an imbalance between the productive volume, which in a normal situation is around 40% of total production and a seasonal market niche of 25%. Outside these two varieties, there might be other problems, but they are not as deep-seated and significant. And if not, we should wait to see what happens next year. The other varieties do not have an over-supply problem and they work in a more stable way.

South African exporters maintain that they want to see Valencian operators in the great world lobby, WCO, which seven new countries have just joined. What is your opinion?

I think that the WCO does not represent the interests of European agriculture, but rather those of a mercantile lobby that is located in northern Europe and South Africa.

A new pesticide has just been removed, specifically for tackling a foreign pest. What is the sector doing in view of these facts?

I think that it is our moral duty to maintain productions that are more environmentally friendly, but consumers must not forget that the products used are to safeguard the quality and food safety. At times products are demonised, although there is no scientific evidence that they are harmful to health and the truth is that there are important lobbies putting pressure on whether a product is authorised or not. It is a very powerful, complete system of interests.

In Europe, we aspire to a farming system that tends towards social justice, environmental sustainability and that looks after citizens’ health, but at the same time we allow the entry of fruit from third countries that has been treated with products that are banned here. A contradiction in terms, I would say.

Perhaps these higher instances that are quick to defend farming, are really intending is to turn Europe into a continent of services and industry, and leave farming in the hands of developing countries, and nobody realises the danger involved in leaving food in the hands of third parties; it is a strategic pillar of any country.