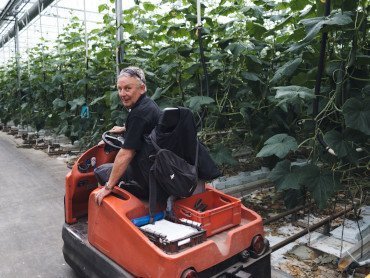 The company Quality Life Produce comes to Fruit Logistica (Hall 3.2 / C-27) this year with an important new development: the incorporation of new greenhouses in northern Holland that will complement their Spanish production. With this step, they intend to get closer to their central European clients, following the growing ‘local for local’ trend, which has become very fashionable, mainly in Germany and France. “Consumers prefer local produce and they don’t mind paying a little more for fruit and vegetables from local farmers. They see it as an added value.” This is an important reality that retailers have known how to take on and promote, as well as increasingly opting for shopping at source, particularly in the case of bio produce.

Job van den Berg, Managing Director of the companies Quality Life Produce and Bioworld, explained to Fruit Today that the Dutch project is made up of 23 hectares of farms under glass for ecological crops and another 18 ha for conventional crops, which will start producing between Week 10 and Week 40. These cutting-edge technological structures allow a yield (kg/m2) of between 4 and 6 times more than is obtained by traditional structures in Spain. “We are going to have weeks when we reach 120,000 kg of cucumbers and 150,000 kg of vine tomatoes,” he advances.

At the same time, Quality Life Produce is maintaining its production in Spain, where it has around 40 ha of ecological crops and another 30 ha that are being converted under plastic, to which are added the open air farms, with 15 ha of ecological and 25 ha of conventional crops, used for potato and cabbage (red cabbage, pointed cabbage…) crops.

The company plans to use this crop diversification strategy to bring the production closer to European consumers with produce available 12 months of the year, giving continuity with the highest standards. “In Spain, cucumbers can be produced all year long, but in the summer, due to the high temperatures, it is better to grow them in Holland,” Van den Berg states.