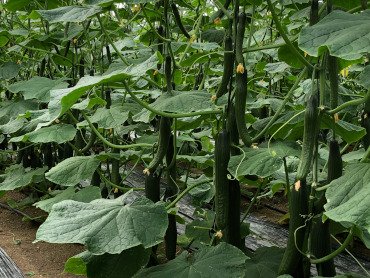 Cliff RZ, the new cucumber from Rijk Zwaan, solves the post-harvest problems for hot cycles or early and spring cycles

In cucumber growing, the greatest quality problems usually occur in the early segment. Generally, the fast development of the fruit generates colouring faults and a lack of post-harvest. A problem that Rijk Zwaan has solved with its latest development, Cliff RZ, using genetics. Javier López, Cucumber Crop Specialist, emphasises the excellent internal and external quality that it has throughout its shelf life. A much sought after characteristic by the producers in this segment and that is also an advantage for ecological crops, which already take up 10% of the total cucumber surface area and regarding the demand for bare fruit. “This spring, the volume of orders of non-shrink-wrapped cucumbers has increased due to the ‘plastic-phobia’ and so the post-harvest becomes more important, although the food safety could become a priority in the future due to Covid-19. The movements by the distribution on this point remain to be seen (such as the commitment to compostable materials).” Another point to emphasise is that Cliff RZ provides “a much darker fruit without shrink-wrapping in trials with witnesses in companies and cooperatives.”

The new variety comes in the Blueleaf concept with resistance to powdery mildew and CGMMV, which also includes Arrecife RZ and Marítimo RZ (medium cycle) and Cósmico RZ and Ínsula RZ (late). The latter has just been incorporated to the catalogue.

Fornax RZ is also a new development, for medium-late cycle, following the Blueleaf route with the resistance to powdery mildew and fusarium of Forami RZ (early-medium cycle). “Up to now, grafting was the only possibility to beat fusarium due to the limitations of the active materials. It has been very well received.”

The latest varieties improve the quality of the fruit with good grooving, colour, shininess and lack of bottleneck.

Blueleaf started its journey with resistance to powdery mildew and its traditional varieties have become references in their segments: Pradera RZ and Manglar RZ (early); Litoral RZ (medium); and Valle RZ (late).