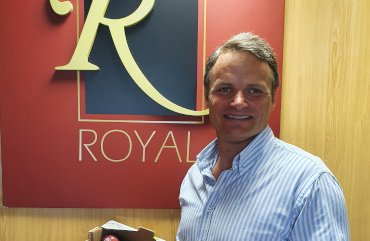 Royal is one of the pioneer companies throughout Europe in growing and marketing fruit with high added value.

Stone fruit took the company to the United States in the 1980s in the search for new varieties that meant better organoleptic and aromatic qualities compared to traditional fruit. This is where the association with the hybrid produces Glen Bradford (Metis®) and Floyd Zaiger (Pluot®) started, whose passion for the agricultural sector made them develop sweeter fruit, with more aroma and greater nutritional properties.

By crossing apricots with plums (and subsequently more crosses with plums) Pluot® and Metis® were born, two high range brands, with very specific characteristics that represent a higher level compared to traditional plums. In both cases, they mean a new colour on the supermarket shelves, along with a complex world of flavours and nuances for consumers. “The idea is not to revive the plum segment, but rather to reinvent it with a fruit that can surprise buyers, as it cannot be compared to the fruit they normally eat,” highlights Pascal Boutin, General Manager of the company from Seville.

“We are experiencing a change in shopping methods because consumers want special items, and the certainty that what they buy will turn out well, in addition to the significant concern about health. Metis® and Pluot® are fruit that have an outstanding antioxidant vitamin content and in some varieties this is much higher than other fruit, such as oranges, strawberries, raspberries or pomegranates. I think that we can best call them “super plums”, the executive comments.

The over twenty varieties of this fruit are present on the market from May to October. Additionally, in the near future Royal will offer the product all year long thanks to the work being carried out in the southern hemisphere. Both aspects will allow their continuous implantation in supermarkets with a significant backing for both brands.

Europe, headed by the United Kingdom, has received this new fruit very well and year after year it continues to back it, increasing the purchase volume. Germany, France and Italy have found a true commitment to value in Pluot® and Metis® and they place their trust in a quality product instead of in traditional plums.

On the Spanish market, this season Royal committed itself to boosting its sale, and in the case of Metis®, creating synergies alongside the club formed by Metis, to carry out a promotion campaign where Spanish buyers are finding a range of fruit families in which each variety is a new surprise.

“Each variety is a new adventure, a journey of flavours that is always exciting and that offers unique organoleptic sensations in each of them. It is like opening a box of chocolates, where you want to try more and more to discover all of them and see which one is your favourite; an aspect that is very complicated with traditional plums. It is a very refreshing fruit, with a perfect contrast of aromas and it is very crunchy, which makes it very appealing for the youngest members of the family.”

This revolution in the segment has come to stay, and Royal is reaching markets that are further and further away, such as China, which, in spite of its commercial complexity and after five years of work, is raising great expectations. “At the same time, other clients are emerging in Malaysia, Singapore or Hong Kong who also want to enjoy this unique fruit which previously was known as a plum, tipping the balance in favour of the unmistakable flavour and aroma of Metis® and Pluot®,” Pascal Boutin explains.