“Sales to South Africa are growing every campaign” 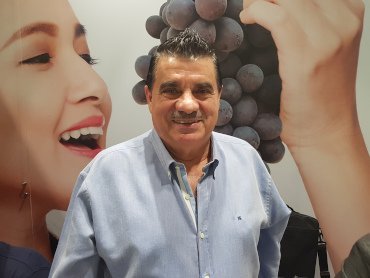 “South Africa is an interesting, attractive destination for our grapes. It is a significant producer and connoisseur of the produce. We are in different hemispheres and we complement the category, but we can also learn a great deal from its powerful industry. It is a highly demanding market, but today it pays the price for the produce,” the executive explains.

The South African market welcomes both red and white grapes and, today, the Spanish company is consolidating around 100 export containers per season.

“We will start sending the new varieties from IFG such as Sweet Glove, Jack Salute, Sweet Celebration and Sweet Joy, along with our own varieties from ITUM, such as 1, 5 and 15 and we will supply some vineyards with Superior, a variety that is expressly aimed at this market. In the very near future, we will also have varieties from ARRA.”

In the words of the Spanish executive, “the plantations we are visiting have unbeatable quality and their industry is very advanced on the subject of varieties. We can learn a great deal from South African producers because they are pioneers in different aspects: plantation measurements, bunch formation, etc. In general, there is an extensive knowledge of the category.”

In recent years, with great commercial insight, Frutas Torero has been combining efforts in its commitment to diversify destinations and not remain only on the European market. “I am a strong defender of relieving the European market and, for this reason, at Torero we have tried to diversify destinations, particularly with grapes, which stand up well to long distances, as we can’t do this with stone fruit.”

Markets have also been opened up in Africa: in Nigeria, Gabon, Kenya, Senegal and Mauritius. “These countries share their preferences with South Africa, with the exception of the fact that they don’t like black grapes.”

On the Asian continent, China and Vietnam represent new destinations, which clearly could show a significant development. “Although we couldn’t send produce to China last season due to the adverse weather conditions of the Cold drop, we expect to be able to do so this campaign and we also have high hopes to be able to reach Taiwan, a market with important purchasing power.”

One of the varieties sent to the Asian markets will be Maylen, an early grape, complicated to obtain, starting its third year of production at Frutas Torero, which now has 7 hectares of this crop.

Grapes are climbing positions in the company from Murcia, which is not forgetting its other important commercial cornerstone: stone fruit, for which the executive has always been in favour of regulating the volume of plantations. “We cannot ignore that production costs for stone fruit are much higher in  Murcia than in Extremadura or Lerida. The only advantage that we have is the earliness of our productions, although this is not enough to be competitive and we also cannot rely on long distance destinations as a commercial alternative.”