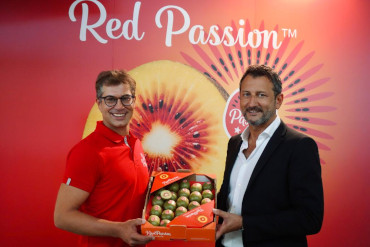 Grupo Catalá has started production of this fruit in Spain within the Kiwi Passion® Consortium, a new player that is growing by leaps and bounds

In recent years we have seen a growing trend in the consumption of yellow kiwis in Europe and the rest of the world. There has been an increase in the offer of varieties and red-fleshed kiwis have appeared on the market. The policies implemented over the past 5 years by important agents in the southern hemisphere and the reduction of the price gap between green and yellow kiwis has speeded up this process to such an extent that in New Zealand the production of yellow kiwis has overtaken the green fruit this year.

On this scenario, a new player is making an important appearance, the Kiwi Passion® Consortium, which currently has almost 100 hectares planted of red kiwi varieties and 80 of yellow ones. Of these, approximately half are in full production. Its next goal is to reach 500 ha in 2023, and to fulfil the target they foresee a plantation program of about 120 hectares per year.  “The success of this first phase will determine the following development plan in order to reach 700-800 ha within 2025,” Nicola Negri, chairman of the Consortium, tells to Fruit Today.

In this campaign, the Consortium will market 500,000 kg of Red Passion® and 350,000 kg of Gold Passion® which will double in the next campaign, as several plantations will come into production.

Within this growth strategy, they have just launched the first Red Passion® produced in Spain. “We are excited about our collaboration with the Grupo Catalá and its premium brand Brunilda, and we are certain that Spanish production will increase quickly over the next few years thanks to a development programme that we are agreeing on at the moment,” Nicola Negri advances. “The consumption and valuation of our red kiwi in Spain is excellent and the goal is to be able to cover the high demand on the Spanish market in order to play a determining role on a market that is growing year after year, and that could be a reference point not only for Spanish consumers, but also for those from other countries.”

The value of the crops from the Kiwi Passion® Consortium specifically lies in the genetic quality of its varieties, which have been selected and developed after several years of research. “We believe that Red Passion® is currently one of the best patented varieties of red kiwis in the world; its intense flavour and sophisticated sweetness characterised by touches of tropical fruit have immediately won consumers over, bearing witness to this every day.” On the other hand, the value of Yellow Gold Passion® lies both in the marketing window and in its highly recognisable organoleptic properties, as it is a late variety with a long shelf life and a very distinctive flavour compared to other varieties present on the markets.

The Kiwi Passion® Consortium has around 70 producer members and 14 sales and packaging associates in Italy, Greece, Spain and France. Numbers that will grow in the very near future, given the amount of requests they are receiving to join the project. “The number of member farmers is going to increase and the Kiwi Passion® family will soon have new members who will contribute to improving our varieties in order to hit ambitious goals. We have already started relations with other countries both on a European scale and in the southern hemisphere, and we will soon be able to put the first counterseason fruit on the market to extend the Consortium’s offer to 12 months a year.”

The problem of inputs

This season, In Italy, growers expectations started off showing great promise due to the high prices of the fruit, between 1 and 1.40€/kg, better positioned than the price of Greek kiwis, around 0.20-0.30€/kg cheaper. However, the enormous increase in the cost of both the raw materials and the services that are affecting the entire supply chain, will cause a drop in the profit margin for the packagers and probably consumers will reduce their purchases as they will have to pay high prices for kiwis, the chairman of the Kiwi Passion® Consortium explains.

Likewise, over the past 2 years, Covid-19 has generated serious repercussions on the European and world markets. Kiwi exports and imports suffered particularly owing to the global restrictions. Additionally, both the increase in the price of transport and the absence of containers has caused a drop in the trade and a generalised increase the production costs.

“The Consortium is supported by an excellent group of logistics partners and qualified suppliers which, despite of all the general problems, have helped to guarantee the delivery of materials and services, allowing us to supply all our clients with our kiwis,” Nicola Negri concludes.