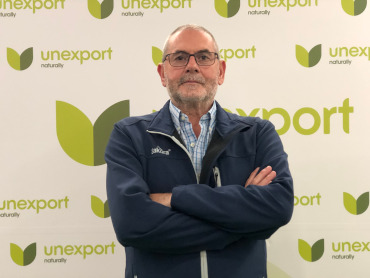 The marketing company, which now has a total of 19 cooperative members, foresees adding another 30 million euros compared to 2020/21

The current campaign brings growth prospects for Unexport. If last year the marketing company from Murcia invoiced 70 million euros with 80 million kilos including all the references, this financial year, it foresees reaching 100 million euros in invoicing. This was confirmed by the recently-elected chairman of the company, Domingo Llamas, who was elected at the Annual Assembly at the end of October.

Llamas comes to the job with the firm conviction of maintaining Unexport’s growth curve with the team of professionals that make up the company, including employees and 19 cooperative members from Murcia, Almeria and Alicante. “We want to get close to our clients and suppliers to make it easier for synergies to be generated. We want to be a bridge between producers and retailers.”

Unexport’s portfolio includes over fifty products, with the largest volumes in vegetables and brassicas, along with watermelons. Products such as broccoli, cauliflower, lollorosso, bianco, oak leaf or specialities such as Redi are just some of their references.

In general, the bio range is experiencing most growth. “It already makes up over 20% of our total volume and it is still rising. We are growing according to the demand by markets and consumers.” On the other hand, they are seeing a considerable drop in the demand for iceberg lettuce. “It is becoming less and less profitable and more difficult to sell. It is a tired lettuce, which is sold too cheaply and needs a restyling,” Llamas states.

In the middle of the agricultural campaign, uncertainty remains about when the climbing prices that inputs have been experiencing for months now will stop. “Prices have gone up by between 15 and 20%. Some, such as energy and diesel are dragging others along with them, such as fertilisers, and in addition to the overrun, we have the problem that the companies can only serve us half of the fertilisers that we need,” Llamas complains. Insecticides, water, labour, plastic… everything costs more, but this cannot be passed on to the end customer. “Between September and November we carry out the planning and the contracts for April to June, and then everything started to go up. The figures don’t add up.”

Another of the problems the sector is experiencing is transport. Unexport’s main market share is in Europe, where transporters are threatening to go on strike just before Christmas and there is a lack of lorries that want to travel to the United Kingdom due to the increase in bureaucratic red tape derived from Brexit. On its second market, the Middle East, in countries such as Saudi Arabia or Kuwait, orders could drop as a result of the increase in freight charges. “Right now, the containers cost three times what they did before the problem in the Suez Canal.” Referring to the possibility that in the future railway freight could be offered using the Mediterranean Corridor, Llamas remains sceptical: “Let’s run a train to Africa. It will start in Algeciras, but will there be any space left when it reaches Lorca? They will have to make it profitable and practical, with timetables that run in line with the primary sector.”

Prev“In 5 years, the fields will be mechanised”
“Spain will play an important role in red kiwi production”Next
YOU COULD ALSO BE INTERESTED IN