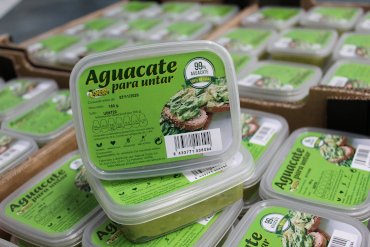 The company from Malaga is already marketing its avocado paste in supermarkets all over Spain.

The tropical fruit campaign has started off this year with an important new development at Natural Tropic. The company has launched its spreadable avocado paste, a 100% natural product that is already on sale in supermarkets such as Aldi, Bon Preu, Jumbo (in the Region of Murcia) and Uvesco, in the chilled food section.

Prepared using the pulp of the avocados from its own farms, the spreadable paste is ideal for eating on its own or as a complement to other dishes. A healthy, convenient and versatile food that has been added to Natural Tropic’s ready-to-eat portfolio, which is made up of several different formats of guacamole (mild or spicy flavour and ecologically produced guacamole). In this way, the company is diversifying its offer and broadening the options for avocado-lovers, who are on the rise, day by day.

“Avocados continue to grow in an unstoppable way,” according to the manager, Prudencio López. The company is taking advantage of this rising trend and it predicts a 15% growth in volume and invoicing for 2020/21. The company’s push is part of a strategy that Natural Tropic has been developing in recent years and it gives priority to its own production, promoting alliances with reliable suppliers in counterseason.

Mangoes are another product that continues to extend their market share, with the Osteen’s campaign ending in October. This year, in general, both the quality and the prices have been good. “At the beginning we thought that sales could drop compared to other years because a year with important quantities was forecasted, but there were problems in the setting phase, so this was not the case.”

In the case of the Osteen variety, a 4kg box was being marketed at much higher prices than a box of Palmer (around 2 € more). “European clients who want quality, opt for Osteen, although many increasingly prefer Palmer due to the price.”

In the previous year, Natural Tropic exceeded 40 million euros in invoicing and incorporated 30% more from its own farms.