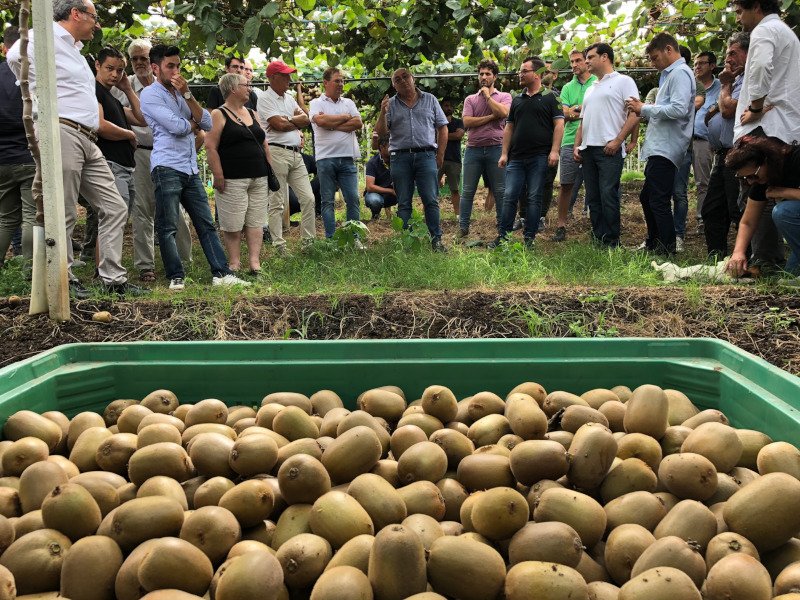 “There is a before and after PSA.” The appearance of this bacteriosis has meant a serious challenge for the sector and a change to the geographical kiwi map in Europe. After the initial setback, businessmen such as Giampaolo Dal Pane, managing director of Summerfruit, radically changed their views and strategies regarding this fruit. In his case, he has been backing covered production for the past ten years. 100% of his yellow and red-fleshed crops are produced with systems such as mesh, plastic and even under photovoltaic tunnels. All of this to guarantee production in bad weather conditions. The news shows that he has got it right. When Fruit Today met Dal Pane, the Latin American region had just suffered from winds of 150 km/hour and in Chile hail had blighted a large part of the crops. “And this is going to get worse.”

PSA has also meant seeking varieties with improved behaviour against bacteriosis. A requirement which, along with the need for diversification, led Dal Pane to promote the Dorì Consortium with Summerfruit s.r.l., along with another four companies: Granfrutta Zani, Kiwi Uno Spa, Fratelli Clementi and Summerkiwi France. At present, all of them market the yellow-fleshed variety AC 1536 using the same brand, Dorì.

Summerfruit has also just launched its first red kiwi (RK-RT varieties, with a name yet to be determined) in this campaign, managing to complete what the managing director calls the ‘kiwi traffic lights’. The executive highlights the red kiwi’s delicate tropical flavour and its characteristic shape, reminiscent of a pear.

With plantations in both the Northern and Southern Hemispheres, the aim is to reach 1,000 hectares of yellow fruit in 2021/22 and to gradually continue increasing the surface area used to grow red kiwis (they have 15 h). Today, most of the 400 h cultivated in Europe are in Italy (340 h) and in Spain they have signed an agreement with Anecoop to market Dorì. Picassent and Torrent are the areas chosen for planting it and they plan to build an important organic plantation. “In Valencia the limiting factor is the wind. The crops must be protected, but it is a good area for the Dorì Golden, which needs fewer than 300 h/cold.” The variety can already be found in supermarkets in Valencia and in other parts of Spain.

Simultaneously, trials are being carried out with Dorì in Huelva, and in three or four years they foresee reaching over 1000 has, also in the southern hemisphere where they already have 130 has planted in Chile.